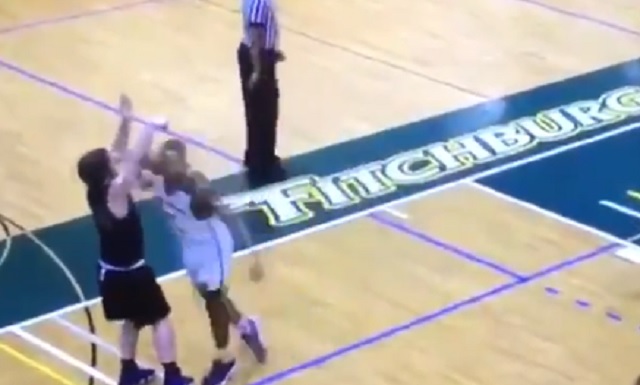 Early this morning a viral video of an extremely dirty foul at a college basketball went viral. The video comes from a Monday night game between two Division-III schools Fitchburg State and Nichols.

Watch as a a player on Fitchburg State straight up cold cocks a Nichols player in the face with an elbow after he takes a three-point shot.

Looks like it is Kewan Platt from the Fitchburg State Falcons. If this is him, the funny thing is he is majoring in Criminal Justice lol

People are already calling for Platt to be expelled from school.

This is one of the most disgusting things on a basketball court I've ever seen. Kewan Platt should be shamed everywhere today and not play another minute the rest of the season. What a clown. https://t.co/mB0sc96og0

@FSU_Falcons what are y'all gonna go about that thug Kewan Platt ? He wants to fight mma we can hook that up but hitting a player who's defenseless ? Some man he is. EXPELL THAT COWARD

@FSU_Falcons As a former student and athlete at FSC(U) , please send out a statement on that horrifically dirty play in the basketball game. That's a disgrace to anyone associated with Fitchburg.

@FSU_Falcons wow. I hope yall called the cops on your own player.

@FSU_Falcons this kid represents your program. Uncalled for and dirty. https://t.co/J8EbMYwPFx

@FSU_Falcons this university is a disgrace if you continue to allow that THUG to play let alone attend your school.. This needs to be handled!!! #justiceforNateTenaglia

Update: Fitchburg State announced that Platt has been indefinitely suspended and has barred from campus for the time being.

“The Fitchburg State community is appalled by the conduct displayed during Tuesday night’s home basketball game,” Fitchburg State athletic director Matthew Burke said in a statement. “The player involved has been indefinitely suspended from the team and barred from campus, effective immediately. His behavior is antithetical to our community values and good sportsmanship. Fitchburg State does not tolerate behavior that violates those standards. The case is being reviewed at the student conduct level for consideration of further sanctions.”