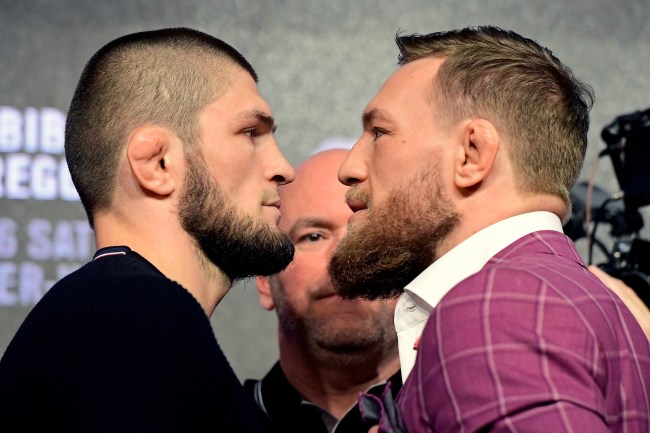 Conor McGregor’s biggest MMA rival wants him behind bars over his latest antics.

Yesterday a video of MMA superstar Conor McGregor throwing a shot glass at an elderly man at an Irish pub in April went viral on the Internet.

Conor McGregor uncorked a shot to the head of an elderly man in an Irish bar in a dispute over whiskey — Conor’s whiskey — and TMZ Sports got this video showing the violence.

The absurd attack went down at The Marble Arch Pub in Dublin on April 6. Conor walked in and lined up cups for bar patrons … looking to buy a round of his Proper Twelve for everyone. The problems started when the guy opted out. Conor placed a cup in front of him not once, but twice … and he still refused.

Unclear if words were exchanged between them, but after Conor downed a shot with the other drinkers, he unexpectedly threw his notorious left fist right in the face of the old man who rejected the booze.

Today TMZ caught up, UFC lightweight champion Khabib Nurmagomedov, who was once infamously attacked by Conor outside of a press event, and he said that he wants McGregor to go to jail over his latest incident.

“It’s crazy. All media stayed quiet; nobody posted about this. I can’t imagine if I punched this guy how many media are gonna post it and talk about me,” Khabib said. “This is like really, really bad thing. Like, even if this old guy on video punch your face 10 times, you can’t punch this guy’s face. You can’t. This is like impossible. We have to respect all people. I don’t understand.”

UFC president Dana White also reacted to video of Conor attacking the man but while he admonished Conor he never said that the UFC was going to suspend him.