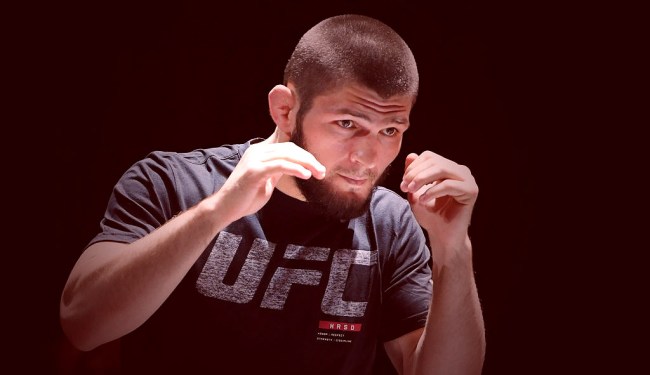 Undefeated, undisputed UFC Lightweight Champion Khabib Nurmagomedov is NOT happy that he and his teammate Zubaira Tukhugov are being punished by the UFC for their actions at UFC 229 while Conor McGregor never faces any discipline for anything.

Khabib wrote on Instagram, both in English and in Russian, “I would like to address @ufc. Why didn’t you fire anyone when their team attacked the bus and injured a couple of people? They could have killed someone there, why no one says anything about insulting my homeland, religion, nation, family?

“Why do you have to punish my team, when both teams fought. If you say that I started it, then I do not agree, I finished what he had started.

“In any case, punish me, @zubairatukhugov has nothing to do with that. If you think that I’ll keep silent then you are mistaken. You canceled Zubaira’s fight and you want to dismiss him just because he hit Conor. But don’t forget that it was Conor who had hit my another Brother FIRST, just check the video.

“If you decide to fire him, you should know that you’ll lose me too. We never give up on our brothers in Russia and I will go to the end for my Brother. If you still decide to fire him, don’t forget to send me my broken contract, otherwise I’ll break it myself.

“And one more thing, you can keep my money that you are withholding. You are pretty busy with that, I hope it won’t get stuck in your throat. We have defended our honor and this is the most important thing. We intend to go to the end. #Brothers.”

While what Nurmagomedov and Tukhugov did at UFC 229 is completely inexcuseable, Khabib is 100 percent right in addressing the double standard he and other fighters face when compared to McGregor.

In related news, more footage of the brawl in the audience at UFC 229 has been unearthed and it shows Khabib’s Dominance MMA managing partner Rizvan Magomedov appearing to harass McGregor team member Dillon Danis, which seems to have been the trigger for Nurmagomedov’s leap into the crowd.

This vid shows Khabib's Dominance MMA managing partner Rizvan Magomedov harassing Dillon Danis who pushes him away as Nurmagomedov notices the skirmish & jumps in to assist. Magomedov who can be seen in other videos scuffling with police trying to break up the brawl was arrested. pic.twitter.com/vP4iFiH219

As UFC Hall Of Famer Chuck Liddell so eloquently put it when referring to UFC 229, what a “sh*t show.”