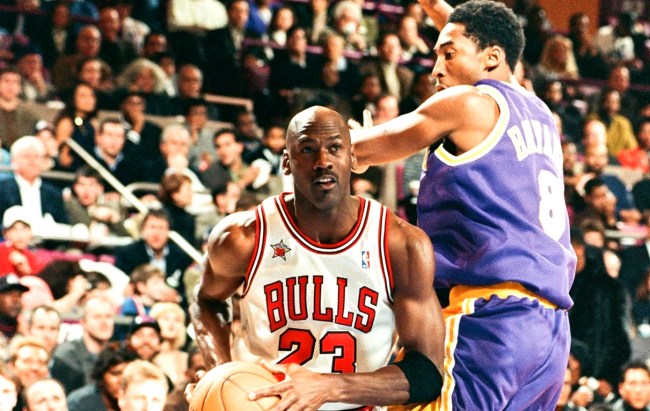 Thanks to ESPN airing The Last Dance these past few weeks we have been reminded of the special relationship Michael Jordan had with the late Kobe Bryant.

During the fifth episode of the documentary series on the 1997-98 Chicago Bulls, Bryant made an appearance to share why he felt like Michael Jordan was his “big brother.”

“Michael provided a lot of guidance for me,” said Kobe. “Like, I had a question about shooting his turnaround shot so I asked him about it and he gave me a great, detailed answer but, on top of that, he said if you ever need anything, give me a call.”

Bryant went on to give MJ major credit for his success in the NBA, “I feel like, what you get from me is from him. I don’t get five championships here without him because he guided me so much and gave so much great advice.”

Sadly, Bryant filmed that scene just a week before his death and now all we’re left with are memories.

One of those memories was encapsulated perfectly this week when Hall of Famer Jason Kidd appeared on an episode of on ESPN’s Hoop Streams.

It involves a 19-year-old Kobe Bryant wanting to test himself against The GOAT in the 1998 NBA All-Star Game so badly that he insulted the reigning league MVP Karl Malone by waving him off so he could go one-on-one with Jordan.

“The biggest thing that stood out was Kobe was going to go after Michael, and he wasn’t scared,” Kidd recalled. “One of the plays that I will never forget, and you can ask Karl Malone about it someday, is that he asked for a pick-and-roll and Kobe waved him off, and I think we were all in awe or shock. That’s Karl Malone, pick-and-roll with John Stockton, they’ve done it a million times, so Kobe and Karl. And Kobe was like, ‘No, no, no, I got this all by myself’ and he waved Karl out and he did his thing. And I think Karl was like, ‘Okay, I need to come out of the game because this has passed me now.’

“For you to just have the nerve to wave Karl off, even if he wasn’t the MVP, just because of his muscles, you had to be different. And so on the bench we were all in tears and laughing and giving Karl a hard time about ‘You must have not set a good screen.’ But it just showed Kobe’s determination to be the best, and he wanted to be the next Michael Jordan if not better. He wanted that one-on-one challenge, and he didn’t feel like he needed Karl’s help at the time.”

By the way, Kidd wasn’t lying. Malone did ask out of the game after the Kobe disrespect.

George Karl confirmed Karl Malone asked out of 98 ASG bc Kobe waved him off. Karl: "Kobe told him to get off the block & get out of my way."

Dammit… now I’m sad again. Can you imagine how fun it would be to follow Kobe on social media with The Last Dance airing now?