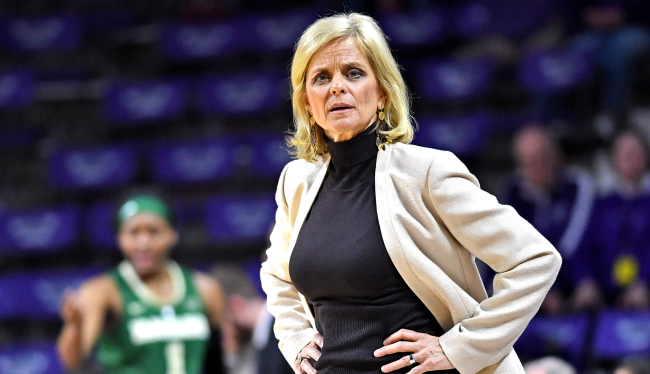 Baylor University head women’s basketball coach Kim Mulkey was one hell of a basketball player back in her day. Seriously, check out some of her highlight from her years at Louisiana Tech and with the USA National team. She was inducted into the Women’s Basketball Hall of Fame in 2020, which is pretty ridiculous, because she should have been put in there many years ago.

A couple of other things that are pretty ridiculous are one of the statements Mulkey made Monday night after Baylor’s controversial loss to UConn and, in turn, fans’ (over)reaction to it.

“You don’t need a quote from me,” Mulkey said about the non-call at the end of the game. “I’ve got still shots and video from two angles. One kid hits her in the face and one kid hits her on the elbow.”

However, that isn’t the post-game comment that got the internet’s jimmies all rustled.

“I don’t think my words will matter, but after the game today and tomorrow, there’s four teams left I think on the men’s side and the women’s side,” said Mulkey. “They need to dump the COVID testing. Wouldn’t it be a shame to keep COVID testing and then you got kids that test positive or something and they don’t get to play in the Final Four? So you just need to forget the COVID tests and get the four teams playing in each Final Four and go battle it out.”

Naturally, this made people mad.

actually words do matter. Kim Mulkey's were pretty tone deaf, would be great to have her clarify, and maybe get her a better mask. #Baylor #finalfour #crisismanagement #sportsbiz #MaskUp https://t.co/IzivMM3c9n

Wouldn’t it be more of a shame if all involved in the final four were needlessly exposed to a virus that has killed over half a million Americans? 🤔 https://t.co/0eMNyZnqJy

Kim Mulkey just said the NCAA needs to stop COVID testing at the Final Four so that one team doesn't get knocked out because of a positive test.

Okay, okay. Yes, what Mulkey said came across very wrong. Of course the NCAA should continue to test for COVID. Unfortunately, even with all that media on hand, no one asked her to clarify her statement.

On one hand, what she said about dumping COVID testing is dumb. On the other hand, what Mulkey said about it being a shame for kids to put in all that time and hard work, made it to the Final Four, and not get to play, is correct.

Throw in the fact that not one player has been hospitalized due to COVID since the men’s and women’s tourneys began, even with VCU having to forfeit their game on the men’s side and UConn coach Geno Auriemma being forced to miss games on the women’s side, and it’s not hard to see where she’s coming from.

Plus, Mulkey doesn’t have a dog in this fight. It would be one thing if she made that statement and her team was still playing in the tournament. That could definitely be construed as being selfish, but her team is heading home.

Yes, what Mulkey said could have been said better, and if someone in the media had followed up on her comment perhaps she would have clarified the sentiment behind it. Or perhaps she would have doubled down. We don’t know. Right now, no one does, but that didn’t happen and as we have seen in the past concepts like that never stop the woke/cancel mob from going full steam ahead when they’re feeling righteous. Even if they might be wrong.