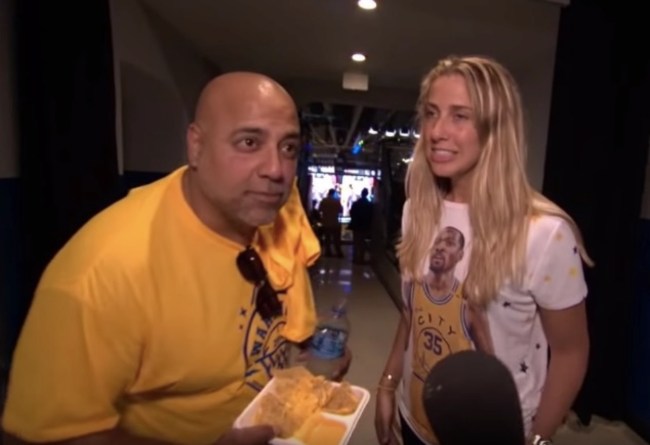 The Toronto Warriors were crowned 2018/2019 NBA Champions after winning Game 6 at Oracle Arena in Oakland, home of the Golden State Warriors. Game 6 was the last ever game the Warriors will play at Oracle Arena as they move to their new home, the Chase Center in San Francisco.

There were SO MANY factors driving up the price of tickets to Game 6 at Oracle Arena including the crazy cost of living in the Bay Area (huge salaries), the fact that it’s the playoffs and Golden State is the #1 bandwagon team in America, and as I mentioned it was the last game ever played at Oracle Arena. The average ticket price to Game 6 was $5,800!!!

So what’s the prank? The street team from Kimmel were on Oracle Arena with a camera to prove just how desperate people are to get on television. They wanted to see how long they could keep Golden State fans on camera during the last seconds of the last ever game at Oracle Arena and wow did they succeed.

I thought for sure these fans were going to peace out with just moments left on the clock and the Raptors had the tiniest lead over the Warriors but I was wrong, they stuck with it because they desperately needed to get on TV. Jimmy Kimmel sets up this clip but the action starts around 0:54 which I’ve set the video to start at:

These people paid $1,000 for seats in the very last row at the very top of the arena for the last Warriors game ever at the Oracle. A thousand dollars is a lot.

I don’t know how much money that is to them but she certainly seems to imply that it’s a lot of money so I assume they’re not Bay Area Billionaires™.

Instead, she stays until she nails the promo after the umpteenth take and the clock has ran down to zero, the game is over, she missed the final two and a half minutes of the game, of her team’s season, the last minutes ever played at Oracle Arena…

All for a non-existent promo that actually turned out to be a Kimmel prank. Pretty cold blooded by Kimmel but MY GOD that fan should know better!