Kings’ Buddy Hield Calls The Team’s 4-Year $90 Million Offer An ‘Insult’, Vows To Find ‘Another Home’ If They Don’t Get A Deal Done By Monday 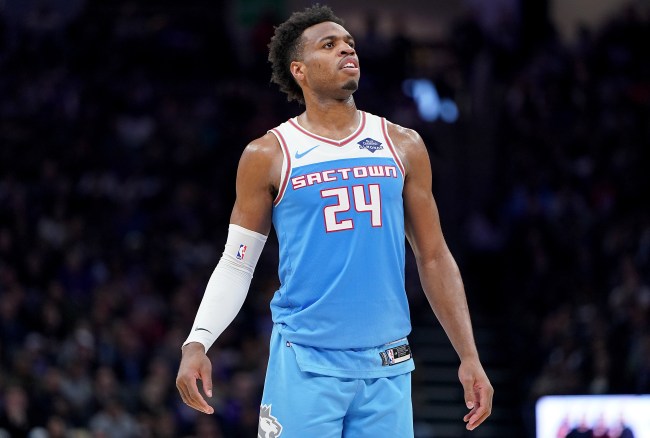 Sacramento Kings guard Buddy Hield wants to get paid before the NBA’s deadline for rookie-scale extensions on Monday.

According to Yahoo Sports’ Chris B.Haynes Hield declined the team’s 4-year $90 million offer because he and his team are looking to get paid around $110 million range in his next contract.

The Kings have an offer for Hield on the table for four years and $90 million, league sources told Yahoo Sports. Hield and his agent, Brandon Rosenthal, are seeking a number closer to $110 million, sources said.

With the 2020 free-agent class expected to be weak in terms of star power, sources said Hield is prepared to bet on himself and play out the season to test the market as a restricted free agent next summer if Monday’s deadline passes without a deal in place.
As the team’s leading scorer last season, Hield’s representation is encouraging management to open up the checkbook to keep a relatively young core together.

After the report, Hield spoke to the media and blasted the the Kings front office by calling their initial offer an “insult”.

“I see it like an insult,” Hield said. “I feel like I’m worth more than that. If you say I’m your guy and you want to build around me, I just need you to show it. Actions speak louder than words. If you’re just talking and not showing nothing, I’m not going to respect it. I love playing here. I want to be here. This is my home. I’m trying to buy a house here, but everything is on stall mode because I don’t know if they’ll really commit to me.”

Hield went on say that he vowed to find “another home” if the team didn’t get a deal done by Monday.

“I don’t know if things are going to get done,” Hield said while standing in front of his locker with more than a dozen reporters gathered around and three team staffers hovering nearby. “If it don’t get done, me and my team will look for something else — probably another home. Until then, we’ll see if they really want me here. That’s the goal, to be here. I love Sacramento, but if they don’t want me here, if they don’t feel like I’m part of the core … I want to be here. If they don’t want me here, find somewhere else to be.”

Kings guard Buddy Hield is taking these contract talks very personally. In an emotional postgame interview, he talked about “finding another home” if the team doesn’t get a deal done by Monday’s deadline. pic.twitter.com/sEkJEZfNkS

“My job is to kill every night so I can be that max player…name one big free agent that came to Sacramento.”

I wish one day someone would “insult” me with a $90 million offer.