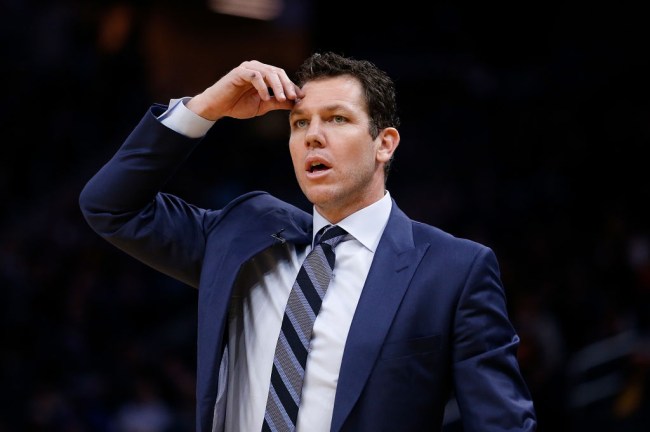 The Sacramento Kings aren’t actually awful this season. The team that hasn’t made the playoffs since the 2005-06 season actually has a shot at making the postseason this year as they try to chase down the Grizzlies for the No. 8 spot in the West, but Sunday’s home loss to the Raptors certainly didn’t help their chances.

Sacramento trailed by three late in the game, but apparently, head coach Luke Walton didn’t think it was in his team’s best interest to have the team’s best shooter, Buddy Hield, on the floor. Hield won the three-point contest during All-Star weekend and is shooting just under 40% from three-point land this season.

At least one fan took notice of Hield’s absence during crunch time and lucky for us the broadcast picked up the audio of exactly what he said. You can clearly hear the fan screaming “Luke, you’re an idiot. You have the three-point champion. Play him. Where is Buddy?”

“Luke you’re an idiot! You have the 3 PT Champion! Play him! Where is Buddy?” 😳 pic.twitter.com/ewGKS4DYBo

After the Kings’ eventual 118-113 loss, Walton was asked why he decided to keep Hield off the floor. He explained that the group on the court was in a good rhythm as they put together a 39-point fourth quarter, which is nice, but they also gave up a 40-point quarter on the other side of the floor.

Luke Walton on his decision to bench Buddy at the end of tonight’s game. pic.twitter.com/u6WNoZxaZo

Hield finished the game with 11 points going 3-for-8 from deep. The Kings are currently four games back of the Grizzlies with 18 games left in the regular season.