Todd McShay, Mel Kiper Jr. Explain ‘Gap’ Between Justin Fields And Trevor Lawrence When It Comes To The NFL Draft 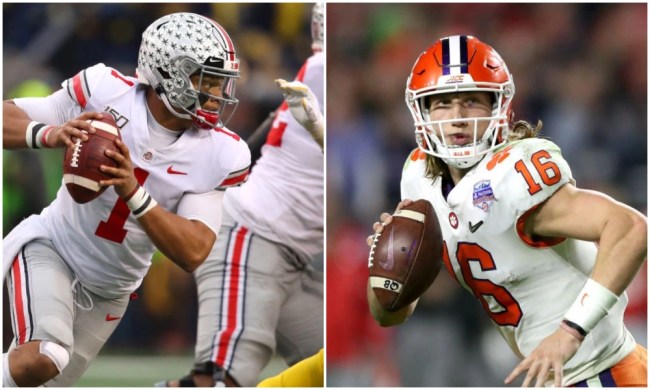 There is a very legitimate chance that Trevor Lawrence and Justin Fields go 1,2 in the 2021 NFL Draft. Whichever teams land these two quarterbacks could very well change the outlook of their franchises for years and years to come.

But, just like everything in life, we have to compare the two players and say that one is better than the other, that’s just how this works.

Lawrence has been the assumed No. 1 overall pick since he took over Clemson as a true freshman. Fields’ career took over a year to get going after he transferred from Georgia to Ohio State, but he actually had a better season from a statistical standpoint a year ago. Lawrence is more the typical build NFL quarterback, however, and can get the job done on the ground.

Both Fields and Lawrence have all the tools, it’s just Lawrence’s tools are a bit sharper than Fields’ when you look at their two games which have led both Todd McShay and Mel Kiper Jr. to agree that there is a slight gap between the two QB’s.

Both NFL Draft gurus joined Wednesday’s edition of ‘Get Up’ and explained what the gap is.

“There’s a gap, it’s not a huge gap,” Kiper Jr. said. “Think about high school coming out. Trevor Lawrence and Justin Fields, 1 and 1a. Would it be 1 and 1a (now)? Maybe had it not been for that Indiana game for Justin Fields a few weeks ago; three interceptions, was off his game, accuracy, (he) just didn’t get into a rhythm. They had a big lead and almost blew that big lead. Had he not had that hiccup, maybe you could’ve said it’s close and it could come down to the wire.

So, there you have it. If Fields didn’t have a down game against Indiana earlier this season maybe the gap is even tighter between these two guys. Nevertheless, with Lawrence getting McShay’s highest grade ever and Fields is within very serious reaching distance of him, if you’re Fields, you can’t feel too bad about that.