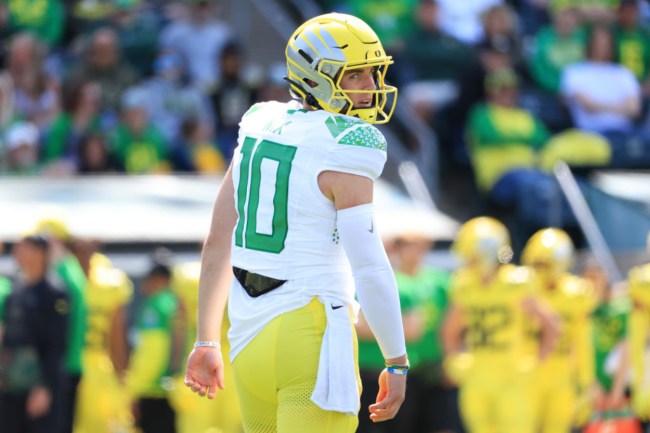 Bo Nix may have transferred out of the SEC to Oregon, but Kirby Smart and his Georgia Bulldogs can’t escape the dual-threat quarterback as the Ducks and Dawgs open up the 2022 season against one another in Atlanta.

While Nix never led Auburn to a win over Georgia during his three seasons on campus, Smart isn’t underestimating his athletic ability heading into the season opener.

Speaking to the media at the SEC Spring Meetings on Tuesday, Smart offered Nix an all-time compliment saying he’s one of the best athletes he’s ever seen at the quarterback position.

“He’s a great athlete; probably one of the best athletes I’ve ever seen at quarterback in terms of GPS numbers, speed, overall athleticism,” Smart explained, according to Oregon Live.

“We had a lot of draft picks on defense last year and we struggled to get him on the ground. He’s a tremendous player.”

Smart explaining his team struggled to bring Nix down last season is a bit of an overstatement given the fact that Georgia sacked Nix four times and held him to under 250 total yards in the Bulldogs’ 34-10 win.

Nevertheless, Smart understands that Nix is an elite athlete and one that can hurt you both through the air and on the ground.

The knock on Nix throughout his college career has been his inconsistency. He has the ability to put a team on his back and win games, just like he did against LSU last season. He can also lay a dud, as he did against both Penn State and Texas A&M a year ago.

Saying Nix is “one of the best athletes I’ve ever seen at quarterback” seems like an over-the-top statement from Smart. It shows that he’s already in prime coach-speak mode four months out from the season opener.