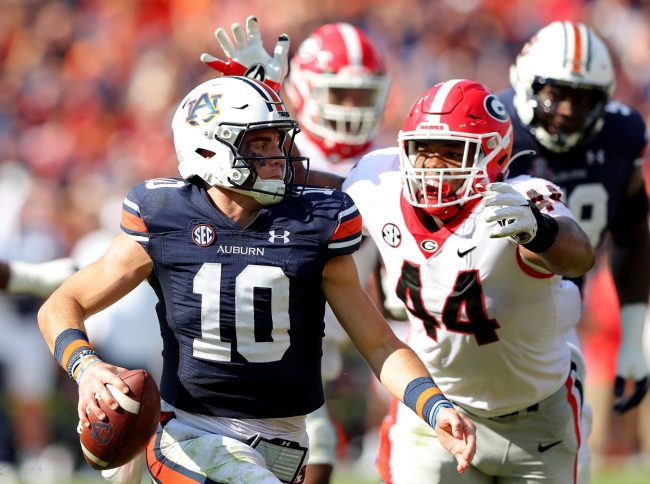 Dan Lanning’s first major move as head coach at Oregon is landing a transfer from Bo Nix. However, when you look at Nix’s performance against Lanning, the decision makes absolutely zero sense.

Nix, who played the last three season at Auburn, played Georgia in all three years. Lanning was the defensive coordinator for the Bulldogs during all three matchups.

Over the course of those three games, Nix’s stats are as follow:

As you can see, Nix has not played well against Georgia.

And yet, Lanning and the Ducks are welcoming him with open arms. It’s certainly an interesting case study.

Could Nix turn it around in the Pac-12? Sure.

Is Nix joining his former offensive coordinator from 2019, his best statistical season? Yes.

Will it make a difference? It doesn’t seem likely.

Things get even more grim when you look at the Ducks’ schedule for 2022. It is not a cake walk and it begins with a familiar opponent.

Oregon opens next season against Georgia. By transferring to play in Eugene, Nix voluntarily signed up to play the Bulldogs for the fourth time.

Nix literally could have gone anywhere else in the country, outside of the SEC, Samford and Kent State, and avoided Georgia’s wrath. Instead, he decided to play the team that he has played his worst against to open his final season of college football.

If Georgia wins its first game next season, Bo Nix’s career record against the Bulldogs will be pic.twitter.com/RpVohRWWO4

After losing to the Bulldogs, Nix and the Ducks will play a top FCS program in Eastern Washington. It is a game which they could very well lose as they look ahead to BYU in Week 3.

From there, it’s a Pac-12 schedule, which is always favorable. However, with a loss to Georgia in Week 1 and a potential loss to BYU in Week 3, their playoff hopes may be dashed before Pac-12 play even begins.

If Oregon does beat BYU, it will play Dillon Gabriel and UCLA at home as well as Utah at home, which are difficult matchups but playing them in Eugene helps. It’s not a terribly daunting schedule after the first three weeks, but with Nix at the helm, four losses is very within the realm of possibility.