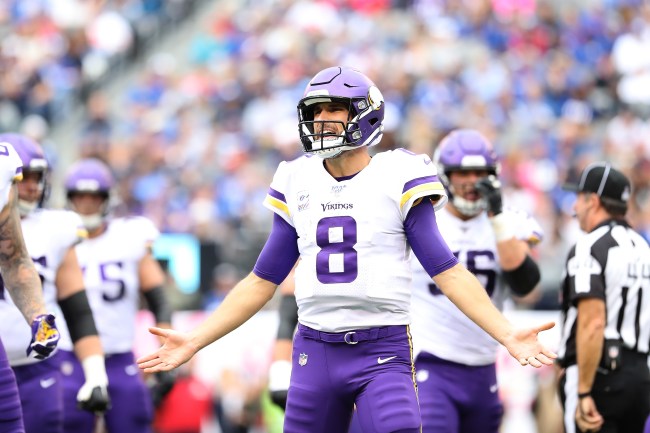 Minnesota Vikings quarterback Kirk Cousins is sort of like the Rodney Dangerfield of NFL quarterbacks; he just can’t get no respect. After inking a massive deal with the Vikes a couple of years ago, all Cousins has done since is throw for 56 touchdowns and 16 interceptions, average 3,950 passing yards and helped guide his team to the playoffs in 2019. While the dude is looking for respect on the field, he may want to be careful with what he says off of it in order to get the same kind of admiration.

That’s because the two-time Pro Bowler really had diarrhea of the mouth about his stance on the ongoing pandemic, saying in an interview a couple of months ago that if he contracts COVID-19, he’s going to “let nature do its course” and, as a result, “if I die, I die.” Take a look below at the full quote from Kirk Cousins, which he said to NFL Network’s Kyle Brandt on the 10 Questions podcast in July.

“I want to respect what other people’s concerns are. For me personally, just talking no one else can get the virus, what is your concern if you could get it, I would say I’m gonna go about my daily life. If I get it, I’m gonna ride it out.

I’m gonna let nature do its course. Survival-of-the-fittest kind of approach. And just say, if it knocks me out, it knocks me out. I’m going to be OK. You know, even if I die. If I die, I die. I kind of have peace about that.”

Now, I’m not trying to be a dick or anything, but, fuck man, Kirk Cousins’ teammates — and, really, any NFL player — can’t be happy with his cavalier approach to COVID-19. The guy is the leader of his franchise and is guiding the huddle each day, and he’s out here talking about living his life as he normally would. Dude, the rest of the “real world” has been stuck in isolation and away from offices, schools, public places, etc. since March, so you may want to jump on the wagon to avoid being more of a problem than the solution.

After understanding the magnitude of his comments, Cousins quickly cried wolf and backtracked in a tremendous way, saying his statement was actually taken out of context and that he “probably wasn’t as clear as I would have liked to have been.” So, as one does after a massive fuck up, he issued an apology.

“I went on that Kyle Brandt podcast about a month ago, maybe a month and a half ago in July, and what I was trying to say back then, admittedly, I probably wasn’t as clear as I would have liked to have been,” Cousins said. “But what I wanted to say then, what I would echo again now is that while the virus does not give me a great amount of personal fear, there’s still great reason for me to engage in wearing a mask and social distancing and washing my hands as frequently as I can and following protocols that have been set in place obviously to be respectful and considerate of other people, which is very important, but then also to be available for all 16 games this fall because as the protocol is set up, if a player were to test positive, they would be potentially out of a game or games. And so there’s plenty of reasons to wear a mask, social distance and be very vigilant to help stop the spread of the virus.

“That was the heart behind what I was trying to say in July, admittedly, I didn’t say it as clear as I would have liked to. So I just want to share that same message again. Hopefully articulate it a little bit better. But that’s always been my heart.”

So, yeah, a major backtrack from Cousins. But, oh, it gets better (or worse, depending on how you spin it), because ol’ Kirk then brought in his faith as a factor for saying what he did.

“Well, I have peace,” Cousins said. “I don’t believe that I can control the outcome of my life. There’s many things out of my control, but obviously my faith is at the foundation of my life and I trust the Lord to handle things and if something happens I trust Him to have a plan and a purpose and to use even a pain, a setback, adversity to use that to help grow me and teach me more about him.”

“Again I think it was just the heart behind it was just saying that I have peace if that were to happen was all that I was wanting to say,” Cousins said.

With COVID-19 killing more than 180,000 in the U.S., Kirk Cousins’ initial comments came across as ignorant, selfish and way out of touch with the reality going on in the country right now. But his apology was just as piss-poor, and it’s clear he tried to cover up how he really feels with some bullshit that everyone can pretty much read through as being false.