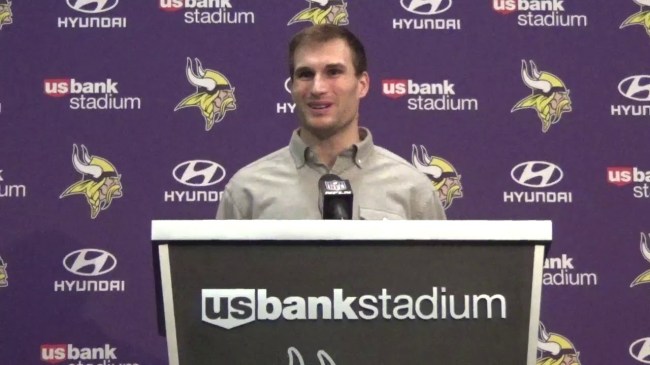 Kirk Cousins had a decent first season with the Minnesota Vikings individually, but, unfortunately, the team failed to even reach the NFL Playoffs this year, meaning they took a major step backwards after reaching last season’s NFC Championship Game. And, while Cousins and his Vikings teammates are probably upset about not coming within a game of Super Bowl 53 this year, the quarterback is at least doing something to help a fan of the team go enjoy the game.

That’s because Kirk Cousins surprised a wounded veteran named Staff Sergeant Anthony “Tony” Craidon with a Super Bowl trip to Atlanta, which is another reason why sports is so awesome.

To make the trip happen, Cousins partnered up with the USAA — which is the NFL’s official Salute to Service partner — as well as the Wounded Warrior Project, and is one of a few other NFL players who are giving back to veterans with some serious thanks. Here’s what the Vikings quarterback tweeted the other day about the surprise for Craidon.

It's truly an honor to be able to partner with @USAA & @WWP to send injured Iraqi war veteran Army SSG Tony Craidon to #SBLIII. I hope you enjoy the game & can't thank you enough for all of the sacrifices you've made. #salutetoservice pic.twitter.com/pNIBTZEzp5

According to Vikings.com, Staff Sergeant Craidon served in the U.S. Army from 1999-2011 as a military police officer. He served all over the world, having been based in Germany, Alaska, Louisiana, Missouri, Bosnia and Iraq. Craidon received the Distinguished Leadership Award and also was the runner-up for the Alaskan Joint Forces Soldier of the Year.

Kirk Cousins is scheduled to meet with Staff Sergeant Craidon down at Super Bowl 53 in the coming days, and he sounds like he’s just as big of a fan of the wounded veteran’s as Craidon is of his quarterback.

“I am fully aware of the fact that our freedom in this country is not truly free and will be forever grateful for individuals like Staff Sergeant Tony Craidon who have made significant sacrifices,” Cousins said. “It’s truly an honor to be able to show my appreciation and support by sending this hero to the Super Bowl with the help of USAA and the Wounded Warrior Project.”

This isn’t the first time this week we’ve seen an NFL player surprise someone with a Super Bowl 53 trip. Just the other day, L.A. Rams wide receiver Brandin Cooks helped the team’s custodian and his son get to the Big Game, too, showing their appreciation for the fans who come and see them play. Good work, fellas, because this type of stuff is awesome.