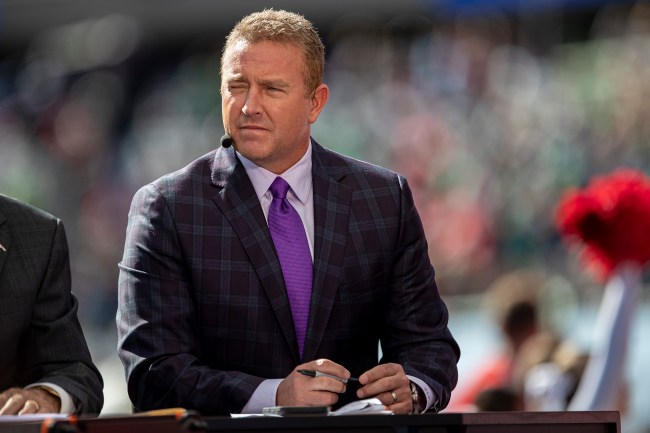 After years of using his platform on ESPN to campaign for the superiority of Power 5 schools, Kirk Herbstreit has chosen to use Cincinnati’s spot in the College Football Playoff as proof that the deck isn’t stacked against the Group of 5.

After SEVEN years of bitching and complaining from a vocal minority that the CFP system is rigged and the “small guy” will NEVER GET A CHANCE-haven’t heard much from ya last couple days.
Everything okay? What’s the next conspiracy theory??
Can’t wait!
Cause that one is history.

I guess Herbstreit has conveniently forgotten that UCF didn’t lose a regular season game for 2 years and was never higher than 8th in the CFP rankings.

Instead of playing in the Playoff in the second year, like you would expect for a team who had just won 25 consecutive games, they were sent to the Fiesta Bowl while Alabama, who didn’t even play in their conference’s championship game, went to the Playoff.

Then we get to the idea that Cincinnati is any kind of proof that the deck isn’t stacked against the group of 5. That idea is absolutely laughable. First of all, Cincy went undefeated last year. 5 of their 9 wins came against bowl eligible teams. They finished 8th in the CFP rankings.

Now we arrive at this year. The year prophets foretold oh so long ago. The year that a group of 5 school would finally make the playoff. This would set everything right.

Here’s the problem, though. Cincy once again went undefeated. Cincy beat the number 5 team in the country. Cincy has a second top 20 win on their resume. That was good enough for Cincy to get the 4th and final spot in the playoffs.

It might not have been if Oklahoma State had beaten Baylor. Some people even wanted to put the Notre Dame team that lost to Cincy in the playoff. Think about that for a second.

Cincy had a top 5 win and was playing a top 20 opponent in their conference championship, hadn’t lost a game all year, and still wasn’t sure that a win in that title game would be enough to make the playoff.

That’s absurd. If they represented a Power 5 conference and had the same resume, they wouldn’t have just been locked into the playoff with that win, they’d at worst be the #2 team in the country right now.

In fact, Michigan being ranked ahead of them is the perfect illustration of the Power 5 bias. Michigan’s best win this year is Ohio State. Ohio State is ranked behind Notre Dame. Michigan has a win over #15 Iowa. Michigan lost a game this year. How exactly is that resume better than Cincinnati’s?

So yes Kirk, the game is rigged. It always has been and always will be. Even if we get the playoff expansion that college football desperately needs, the game will still be rigged for Power 5 teams to get the top seeds.

One Group of 5 school barely being rewarded for an incredibly impressive undefeated season doesn’t change anything.