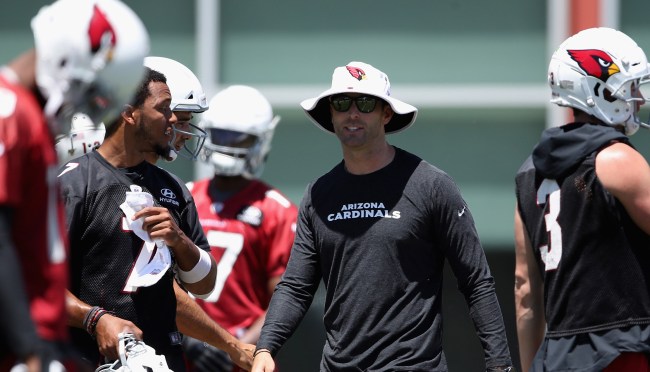 Arizona Cardinals players might want to tread a little more carefully these days when it comes to who they follow and what they post on social media. That’s because their new head coach Kliff Kingsbury has admitted to having his staff create fake female accounts and using them to spy on his players in the past.

AZCentral.com brought this news to light over the weekend as the Cardinals’ minicamp came to an end when they discovered an appearance Kingsbury made on A.J. Hawk’s “The Hawkcast” podcast in 2016.

The reason for the discovery has a lot to do with Kingsbury announcing back in March that he will be giving Cardinals players “cell phone breaks” during practices.

“They’re itching to get to those things. … Oh yeah, you start to see kind of hands twitching and legs shaking and you know they need to go get that social media fix, so we’ll let ’em,” said Kingsbury. “Let ’em hop over there and then get back in the meeting and refocus.”

While that unique policy might sound good to today’s players, Kingsbury admitted that back when he was the head coach at Texas Tech, his staff had “fake accounts with cute girls that they add right now so we can see what’s going on, who’s tweeting what. Those are heavily monitored, for sure.”

He also said that he believed his players knew about his surveillance, but… “they can’t resist that. Friend requests from cute girls are an automatic follow.”

Sports in the 21st century, folks.