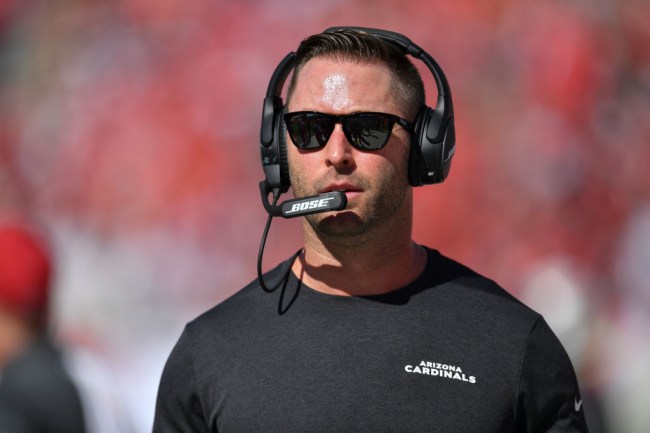 Year one of the Kliff Kingsbury and Kyler Murray era in Arizona could have been worse. While the team’s record of 5-10-1 isn’t too glamorous it was in improvement to their 3-13 record the year prior. Murray also put together a strong campaign and was named NFL Offensive Rookie of The Year, so again, it could have gone much worse.

Well, it turns out that Kingsbury was convinced that things were indeed going to go downhill, and fast.

Kingsbury joined The Ryen Russillo Podcast and revealed that during the first half of the Cardinals season opener against the Lions, a game that would eventually end in a tie, the first-year head coach was legitimately worried that he was going to get fired.

The bad thoughts started coming with the Cardinals down 17-3 early.

“I’m not exaggerating, I was thinking, ‘I can’t believe I just bought that house. I’m gonna be here two games and they’re gonna fire me,’” he said. “That was about the highest anxiety I’ve ever had on the sidelines. Truly anything we tried to do was a complete disaster.”

“I remember thinking, ‘I cannot believe I spent that much on a house, I’m screwed on this deal because this is going to be a short stay and I don’t know what we’re going to do.’”.

Kingsbury even began thinking about general manager Steve Keim, who was responsible for getting him hired in Arizona in the first place.

“That was a rough 30 minutes and I just kept thinking about poor Steve up there in the press box with the owner, probably just wanted to jump off the balcony,” he said. “But luckily it worked out.”

Kingsbury is a guy that keeps things very real and this is certainly a very real moment, hats off to him for being honest about what exactly was going on with his team getting throttled early in game one of his NFL career. It’s funny that his mind immediately went to his house and how the hell he was going to make payments if he did end up being unemployed.

It all worked out in the end though as Detroit and Arizona tied 27-27.