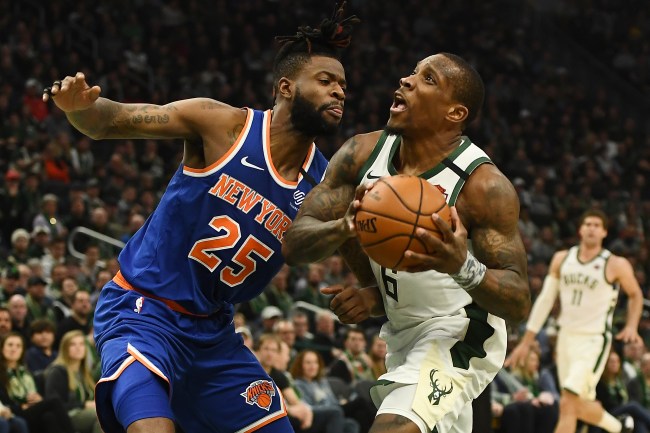 Stop me if you’ve heard this one before: the New York Knicks are god awful this season. Giannis Antetokounmpo put up 37 points, 4 assists, and 9 rebounds against the Knicks in less than 25 minutes this week. They are second-to-last in the East (14th) with only 11 wins (30 losses) on the season.

Knicks fans don’t have much to be thankful for other than the fact that Madison Square Garden is the greatest arena on the planet. They’ve got that. They also have the half-court shot at half-time, right?

A Los Angeles Lakers fan was recently awarded a $100,000 check!!! after hitting a half-court shot. It’s one of the most time-honored half-time traditions in basketball. So when Knicks fan Anthony Peterson got his chance at the half-court shot he must’ve been thinking ahead to an awesome prize and eternal glory. Unfortunately, it didn’t work out that way at all…

Anthony Peterson got with the Action Network for an interview about his half-court shot and the legendary West 4th St. baller got his chance to torch the Knicks for their shitty prize, a prize that probably gave him carpal tunnel, and a prize that immediately depreciated when he got home.

They hooked the man up with $1,000 on scratch-off lottery tickets! That could’ve been cool if he went on to win $50,000 in lottery prizes. Instead, he only won $500 and had to burn his wrist and hand scratching off an asinine number of tickets. He didn’t hold back in his interview when talking about the Knicks:

He was asked about how he got the chance to take the shot and whether or not he practiced:

ROB PEREZ: How do you even get selected to participate in a halfcourt shot contest? Did the Knicks approach you? Did you apply? Neutral party?

ANTHONY PETERSON: You know the guys and gals who shoot the t-shirts out of the blaster things? One of them approached me and asked if I wanted to participate in a game, and I said, “Sure. 🤷🏽‍♂️.” I figured I’d have a chance to win some money, so why not try to get my pockets up?

RP: Did you practice at all before going out there? Or just let the basketball gods decide your fate?

AP: PRACTICE??? (Allen Iverson voice) Lmfaooo, I’m not sure if you know, but I actually do this shit. Can I swear? I’m known out in these streets. Ask about me at West 4th. (via)

Anthony Peterson said he wasn’t nervous (“about 2% nervous”) because he says he remembered who he was and that allowed him to just settle into the moment and hit the shot. He said he knew the shot was going in right after he took his first attempt and had to realign a little bit before draining the half-court shot and said he knew it was going in the net as soon as he let the ball go.

Here’s what he had to say about the Knicks and his prize of $1,000 worth of scratch-off tickets:

RP: What was your reaction when you found out the prize was $1,000 worth of lottery scratchers?

AP: Well, when they said scratch-offs I instantly got a headache because I was going to have to scratch them all off. I thought about who I could hire to do it for me, but then figured they might want some of the money, so I negated that idea. I was sort of like, “What the f*ck man? Some dude just won $100,000 doing the same shit in L.A. and I get some bum ass lottery tickets.” Still a blessing though.

RP: Have you started scratching yet? If so, how many tickets do you have to get through?

RP: Were the scratchers those quick “match numbers or symbols” tickets or the Bingo ones that take like an hour to get through? Or were they straight lotto tickets like the Mega Millions ones you can buy at the corner store?

AP: They were $5 match-the-number tickets. Reveal a symbol, win double. Nothing crazy. (via)

He told Rob Perez at Action Network that he had to ‘scratch in shifts’ because his ‘wrists were throbbing’ and there was dust from the scratch-off tickets everywhere in his home.

When I first came across this story I was thinking that $1,000 in scratch-off tickets was actually a pretty cool prize because I love scratch-off tickets. My mom would buy them for me all the time as a kid whenever we’d go on family trips. She’d also stuff them in my birthday cards for fun. It was a family tradition.

But you see the payout of $500 from $1,000 in tickets and it’s pretty plain that scratch-offs are a sucker’s game even if it’s fun to play. He got hosed by the Knicks who continue to be one of the most profitable professional sports teams in the world because of Madison Square Garden while simultaneously treating their fans like shit, and kick out/ban fans who speak out against their bum ass owner.

Knicks fans deserve better. The city of New York deserves a hell of a lot better.

To read the full/entertaining interview over on the Action Network, you can click here.