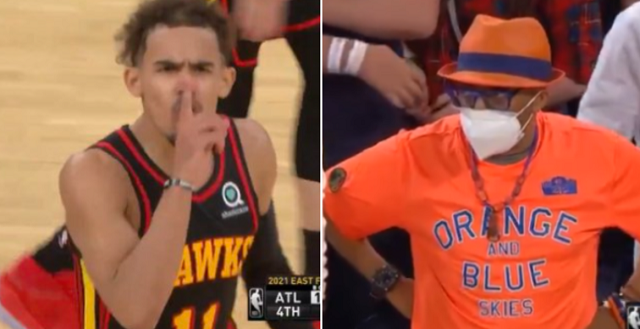 Madison Square Garden was packed with 15,000 fans for the first time in a long time on Sunday night but unfortunately things didn’t end well for them.

Early in the game Knicks fans were hyped up and chanting “f*ck Trae Young”in the team’s first playoff game in 8 years.

Young appeared to enjoy playing the villain and mocked Knicks fans after hitting the game-winning shot with .9 seconds left in the game.

After the game, Young said he enjoyed all the F U chants from the crowd.

Trae Young: "I just wanted to hear those F U chants again" pic.twitter.com/Ticcn89lxS

When you’re in the zone and everyone is chanting F U…I’ve had it in college and I had it again tonight, it got real quiet at the end, for me I wanted to hear those FU chants again.

Trae Young is only in his third season in the league but he’s already a killer.