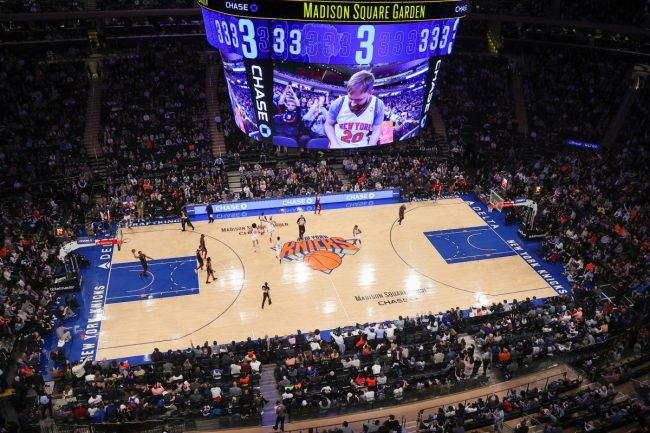 New York Knicks fans are down bad after seeing a trio of its team’s stars lose to amateurs at a recent Pro-Am event. Julius Randle, Obi Toppin, and newly acquired Jalen Brunson were on the losing end of a 13-point defeat.

The NBAers teamed up for some offseason work in the New York Pro-Am, which is highlighted by both professional stars and amateur players. Many pro players have been on the circuit this summer, giving basketball viewers a few highlights (and lowlights) during the down time. While the games are far from reaching the intensity of an NBA atmosphere, many still enjoy dissecting the action.

So, when the Knicks’ trio fell to a group of players that aren’t playing in the league, many took note.

Randle, Toppin, and Brunson combined for 67 of their team’s 97 points, but they ultimately fell by a score of 110-97. The 13-point defeat had fans picking fun at the Knicks, saying it’s a sign of things to come in the Big Apple this season.

The Knicks offered a lot to land Jalen Brunson this offseason, and they are still hoping that former first-round pick Obi Toppin will blossom. They’ve held on to Julius Randle despite some trade rumors.

While there probably shouldn’t be too much stock put into the trio’s latest loss, no one will miss out on an opportunity to troll a rival fanbase.

Take a look at the response on social media.

Knicks fans watching this thinking they gon be nice next year pic.twitter.com/yYGCGQeFEP

Jalen Brunson, Julius Randle and Obi Toppin teamed up in a PRO-AM game just to lose by 13 😱

Julius Randle, Jalen Brunson and Obi Toppin's team are losing by 7 with 3:33 left and their opponents are celebrating pic.twitter.com/ctXOpXGxF3

A Pro City Hoops team that had Julius Randle, Jalen Brunson, and Obi Toppin lost by 13 points to a bunch guys that have to wake up to their 9-5 job tomorrow.

Tough look for the Knicks.