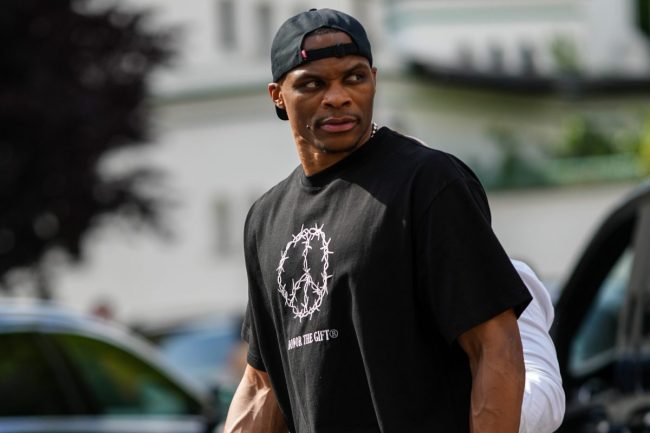 The New York Knicks reportedly have an interest in Lakers’ guard Russell Westbrook. This news coming after they were believed to be the top landing spot for Jazz guard Donovan Mitchell.

According to a report from NBA insider Shams Charania, the Knicks are one of a number of teams still weighing the option of adding Westbrook.

The Jazz, Knicks and Pacers have expressed interest in acquiring Russell Westbrook and draft capital from the Lakers.

New York is reportedly one of a trio of organizations looking to not only add the talented point guard, but also the potential of draft picks for the future.

Russ averaged 18.5 points per game in Los Angeles last year, but he dealt with a great deal of criticism along the way. Things only got worse when the Lakers missed the playoffs despite having the supposed three-headed monster of Westbrook, LeBron, and Anthony Davis.

While the guard did opt into his $47 million player option for 2022, the team is still open to a trade.

But for Knicks fans, the Westbrook rumors are a stark contrast from what was heard throughout last week. New York had been named as the favorite to land Donovan Mitchell, with some believing that a deal was already in place.

Then, there was silence over the weekend.

Shams Charania gave some insight to the Knicks status with Spida, and it’s not as promising as initially thought.

Talks so far have moved slowly and the sides are far from an agreement. With three years remaining on Mitchell’s contract, the Jazz are not operating with a sense of urgency… Sources said the three-time NBA All-Star has not requested a trade… but should the franchise move toward a full rebuild, a competitor like Mitchell would prefer to be in an environment geared toward winning now.

Charania also says that teams like Washington, Miami, Toronto, Charlotte, Sacramento, and Atlanta are also interested in Mitchell, and the Jazz could wait and see who gives the best offer.

With the Knicks now being linked to Russell Westbrook after all of the momentum we saw last week with Mitchell, fans are melting down on social media.

Leave Knicks out of this

Knicks fans are not going to be ok if the Knicks miss out on Mitchell, but end up with Russ. https://t.co/ihNFsCWojR

The Knicks are looking to add some talent in the backcourt, but it seems fans would be much happier landing one of these players as opposed to the other.