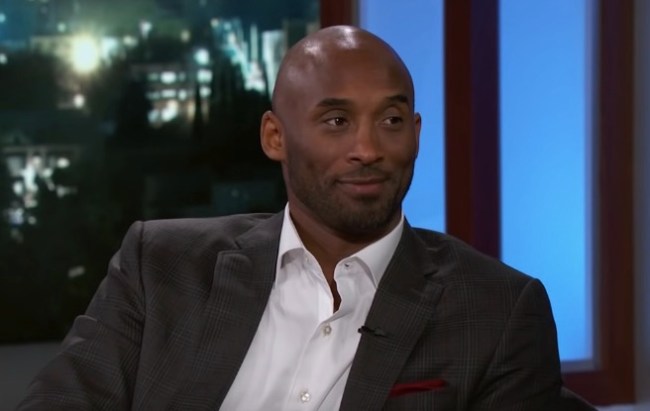 Kobe Bryant ranks 3rd on the all-time NBA list for Points Scored, 3rd in field goal attempts, 5th in shots made, 1st in shots missed, 3rd in free throws made, 12th in points per game, and 12th in most 3-point shots ever made. He’s ONE HUNDRED PERCENT in the discussion when it comes to the greatest NBA player(s) of all time.

Since retiring in 2016, Kobe Bryant‘s kept up an active lifestyle. He won an Academy Award this year in the ‘Best Animated Short Film’ category for his film Dear Basketball. In 2016, he launched a venture capital firm with $100 million in funding. He’s made millions in a sports drink company. And when he’s not printing cash from his investments he finds time to coach his daughter’s basketball team.

Kobe was a guest on Jimmy Kimmel Live last night where he talked about his role in getting LeBron James to come play for the Los Angeles Lakers. He was surprisingly hands off when it came to getting LeBron to play in L.A. other than advising the Lakers’ owner on what circumstances need to happen before LeBron would make the jump to the West Coast.

Kobe spoke with Jimmy last night about life in retirement, coaching his daughter, the Lakers, and more. There are a few so be sure to check ’em all out!

In these clips, Jimmy calls out Kobe Bryant for being a complete and total lunatic when it comes to training and preparation. Kobe’s infamous for putting in more time on the court than anyone else and here he acknowledges that he’s aware of his lunacy. They also talk about Kobe’s habit of reaching out to others who are the greatest in their field.

Kobe also talks about his new book Mamba Mentality in this last clip.

Today I learned that Kobe Bryant learned to tap dance in order to protect his ankles on the court. I’m not sure how I’ve never heard this story by now and it has me wondering what other crazy ass Kobe stories I’ve missed throughout the years.