Kobe Bryant High School Footage Part Of Auction Expected To Fetch Up To $350,000 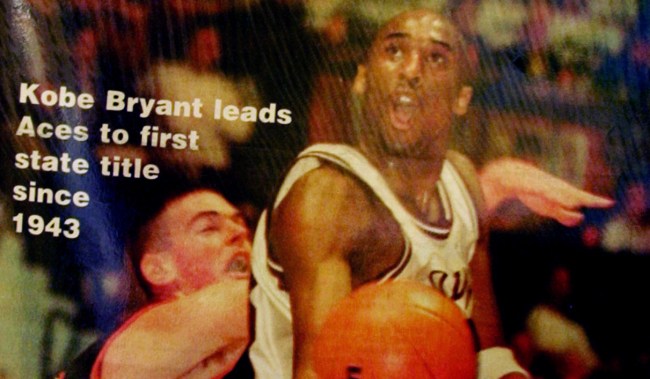 Several hours worth of game and interview footage of the late Kobe Bryant from his time at Lower Merion High School is going up for auction.

The clips of Bryant, who made the successful transition from high school to playing for the Los Angeles Lakers after being chosen in the first round in 1996 and becoming just the sixth player in NBA history to be selected straight out of high school, are expected to fetch somewhere around $350,000 when they are sold on July 23rd by the auction house Profiles in History in Calabasas, a suburb of Los Angeles.

The footage is from the media library of Stu Ross, who produced “High School Sports Show,” a syndicated weekly television series seen in 35 cities.

About 60% of the Bryant footage is of games involving the Lower Merion Aces from the Philadephia suburbs.

Ross’ library includes 130 hours and more than 700 athletes, including LeBron James, Tom Brady, Michael Phelps, Ryan Braun, Dwyane Wade and Shaquille O’Neal. The footage will be sold in one lot, and the auction house estimates the price will be $250,000 to $350,000.

Yeah, he was pretty good.