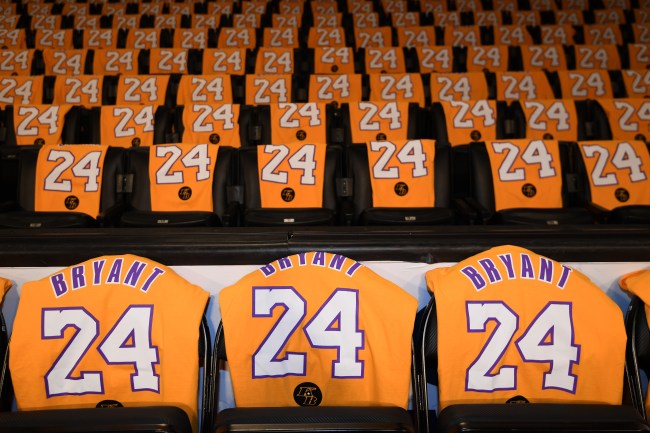 On Friday night, the LA Lakers honored Kobe and Gigi Bryant in an emotional tribute in the team’s first game at home since Kobe’s death last Sunday.

Before the game, #24 and #8 Kobe memorial shirts were given out to fans in attendance.

Everyone who attends the Lakers game Friday night will get a free Kobe Bryant tribute shirt, courtesy of the team … 20,000 in total.

The hard-working people at Staples Center have draped a Kobe shirt on every single seat — half of the arena will get Kobe #8 shirts. The other half will get #24 shirts.

Fans at tonight’s Lakers game against the Trail Blazers will receive these shirts to honor Kobe Bryant. One number for each side of Staples Center. pic.twitter.com/mmJ5wbSF9p

Not even 24 hours passed and some of those fans are already selling their memorial jerseys for hundreds of dollars on eBay.

Memorial Kobe shirts from last night’s game are selling on eBay. The only way this is even remotely appropriate is if the proceeds from these sales go to benefit the families involved in Sunday’s crash pic.twitter.com/ripQi4kdir

@Lakers I know you have no control over this, but some of your DISGUSTING "fans" are profiting off of Kobe's death. They're selling last night's giveaway on @eBay for ridiculous prices. Very few benefit charity. pic.twitter.com/nzD5yZH55r