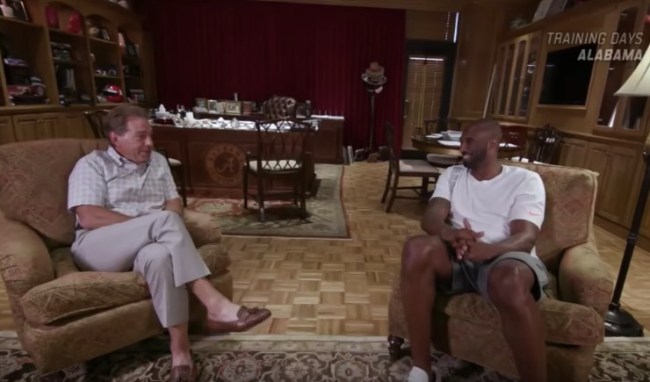 Likewise, Nick Saban is one of the greatest College Football coaches in the history of the sport.

I didn’t go to an SEC school (I went to FSU) so there’s no reason for me to stan SEC football. But as a fan of the sport, I can objectively say that Nick Saban is one of the greatest coaches of all time and he has the chance to go down as *THE* greatest if he stays at Alabama long enough.

It’s always interesting when you get two titans of industry together. That’s often what makes podcasts so great. Like Marc Maron‘s WTF Podcast for instance. You’ve got a comedy great interviewing acting legends. Here we’ve got something similar and also pretty unexpected.

Five-time NBA champion Kobe Bryant visited the University of Alabama Football program earlier this week to speak about leadership in front of the Crimson Tide players. Later, he met with Head Coach Nick Saban for a one-on-one discussion where the two speak candidly.

As a non-Lakers fan, I could often look at Kobe’s performance and see selfishness mixed with leadership. Sometimes he’d put the team on his back and score a billion buckets and you weren’t quite sure where that was coming from.

I think this quote from Kobe is pretty interesting because it helps you look at his contributions under a different microscope:

“To be an effective leader you have to be a really good listener, and not to what’s being said, but to what’s not being said. You have to be really observant, that was a big transition for me, I went from being a scorer and a floor general to, now, with Pau [Gasol] and Lamar [Odom] trying to win another championship, to being a leader. That meant putting others first.

“[Your teammates] all have things that they want to accomplish as individuals. As a leader, you’re like OK, what are those things? And how can I help them accomplish that within the system and structure that we have collectively?”

It’s amazing how this advice can be applied to just about any field on the planet, not just basketball. It is about being an effective leader, and not just winning NBA Championships.

Even if you manage a small team of 5 individuals this ‘Mamba Mentality’ is some earnest advice you can take to heart and apply to your life.