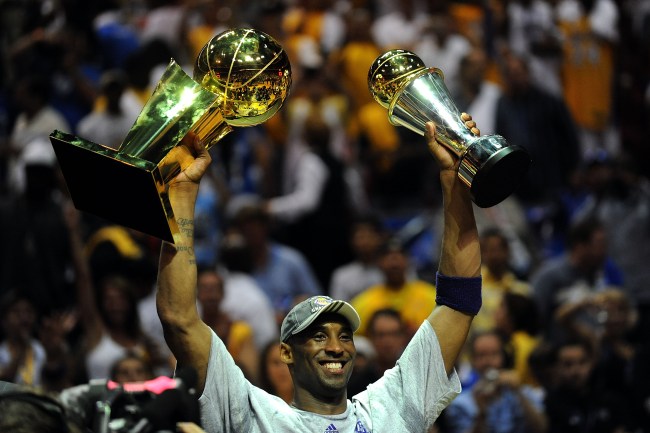 Kobe Bryant always placed winning as his ultimate goal in life. Whether it was scoring titles, Olympic gold medals, or NBA championships, Kobe wanted to win. Kobe was determined to win NBA championships, even before he was an NBA player. As a kid, Kobe had a desire to capture eight NBA championships and his reasoning for wanting to do so is so very Kobe Bryant.

Even as a child, Kobe had dreams of hoisting up the Larry O’Brien trophy. But just one NBA championship wasn’t enough for Kobe, he set out a goal of winning eight NBA championships.

In a 2018 interview, Kobe said he has always dreamed about wearing eight NBA championship rings so that he would have more rings than his basketball idols Michael Jordan and Earvin Magic Johnson.

“As a kid, you grow up, and you say, ‘OK, this is what I want to do. I want to win eight championships,'” Kobe said during a question and answer session for Body Armor, a sports drink company that Bryant was a part owner in. “And I fell three short. But that was a real thing for me. Like, this is what I’m going to do.”

When asked why he wanted eight championships, Kobe explained: “Because Magic had five, Jordan won six. So Michael won one more than Magic. I wanted to win two more than Mike. It makes no sense, but it made sense to me.”

That is such a Kobe Bryant answer. “It just made sense to me.” In the mind of Kobe Bryant, he didn’t just want to have as many or one more NBA championship than Michael Jordan. Because of his extreme competitive nature, Black Mamba needed to have two more NBA championships than His Airness so that there would be no debate if Kobe was a better basketball player than MJ.

To hammer it home on how competitive Kobe Bryant was, here is an excerpt from Kobe’s 2018 book The Mamba Mentality: How I Play.

“From day one, I wanted to dominate. My mindset was: I’m going to figure you out. Whether it was AI, Tracy, Vince—or, if I were coming up today, LeBron, Russ, Steph—my goal was to figure you out. And to do that, to figure those puzzles out, I was willing to do way more than anyone else. That was the fun part for me.”

Kobe Bryant died at the age of 41-years-old in a helicopter crash in Calabasas, California. We will never see another basketball player quite like Kobe Bryant.