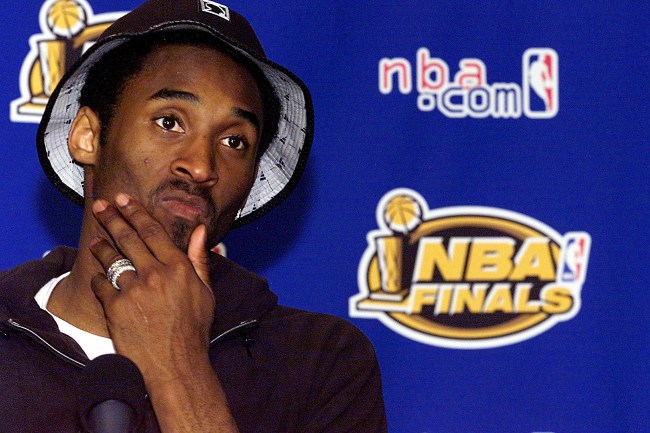 Kobe Bryant was fixated on winning NBA championships, and his one goal since he was a kid was to win eight NBA championships. So when Kobe Bryant won the 2001 NBA championship, it was perplexing for many to see the superstar basketball player crying tears of sadness. The reason for Kobe’s sorrow following hoisting up the Larry O’Brien trophy has to do with his tumultuous relationship between his parents and his wife.

On June 15, 2001, the Los Angeles Lakers defeated the Philadelphia 76ers in Game 5 of the NBA Finals to win their second-straight Larry O’Brien trophy. In the Finals, Black Mamba averaged 46.8 minutes per game, 24.6 points per game, and led the team with 5.8 assists per game. The Lakers won the NBA championship at the First Union Center in Philadelphia, Pennsylvania, which is Kobe’s hometown.

Even during the post-game interview, Kobe was not ecstatic about winning back-to-back championships, and his mood was somber and reserved. But he went out of his way to thank his wife for her support.

“I think the time off helped me put things into perspective to find out what’s important in my life, basketball is a big part of my life, but is not the thing,” Kobe told NBC Sports reporter Jim Gray. “A lot of the credit goes to my wife, for not only putting up with but supporting my work ethic. She supported me, so a lot of credit goes to her.”

There are surreal photos of Kobe Bryant sulking in the shower, embracing the Larry O’Brien trophy, and crying immediately after winning an NBA championship.

Most ppl see the picture of Kobe crying while holding this trophy, but they don’t know that he was crying because he was playing in his home town of Philly in the championship…and his parents didn’t come to a single game. He was hiding in the shower. pic.twitter.com/wNmxVO1DOX

The Reason Kobe Bryant Was Sad After Winning The 2001 Championship

A lot of people have seen the iconic Kobe Bryant photo of him just sitting in the showers after winning the 2001 Finals with th… pic.twitter.com/JXMWJgPKsi

Apparently, Vanessa Bryant gave Kobe the support that his parents didn’t. In an article titled Where Does Greatness Come from the May 2012 issue of Sports Illustrated, writer Chris Ballard revealed the reason why sadness overwhelmed Kobe despite just winning an NBA championship.

“The falling out occurred in 2000, though neither Joe nor Kobe talks about it publicly anymore. At 21, Kobe got engaged to 18-year-old Vanessa Laine, whom he had met on the set of a video shoot when she was a high school senior. Joe did not approve. The problem, according to the Los Angeles Times, was that Joe was ‘uncomfortable that Vanessa, a Latina, is not African-American, and he is uneasy with [Kobe’s] selfless devotion to her.’ When Kobe and Vanessa got married the following year, Joe and Pam didn’t attend the wedding. When the Lakers played three games in Philadelphia during the 2001 NBA Finals, Joe was nowhere to be found. When, at the end of that series, the Lakers triumphed, and Kobe was spotted holding the trophy in the shower and crying, everyone assumed it was out of joy, or relief. But he later told the Times, ‘That was about my dad.’”

Kobe couldn’t share one of his crowning achievements in his illustrious career with his own father in his hometown. Anyone, especially a 22-year-old, would be heartbroken.

In the past, Kobe opened up about his broken relationship with his parents, his father is former NBA forward Joe “Jellybean” Bryant, and his mom is Pam Bryant. In 2016, Kobe gave an interview to ESPN’s Ramona Shelburne where he revealed that he hadn’t spoken to his parents in years.

“Our relationship is sh*t,” Kobe said. “I say [to them], ‘I’m going to buy you a very nice home, and the response is ‘That’s not good enough?’” Kobe claimed.

In 2013, Kobe’s parents attempted to auction off six of their son’s possessions as memorabilia, including two of his high school uniforms and two rings for the 2000 Lakers championship team.

Kobe ended up suing Goldin Auctions, the brokerage company his parents used to sell off his items. Goldin Auctions countersued Kobe, claiming that Pamela Bryant was the rightful owner of the property. The company had already given Pam Bryant an advance of $450,000 for the items. Kobe’s parents used that money to buy a new home in Las Vegas.

Joe and Pamela Bryant issued an apology for the auction incident: “We regret our actions and statements related to the Kobe Bryant auction memorabilia. We apologize for any misunderstanding and unintended pain we may have caused our son and appreciate the financial support that he has provided to us over the years.”

Sadly, it doesn’t seem like Kobe and his parents were able to mend their strained relationship before the tragic death of the Lakers legend. Joe and Pamela Bryant lost their son in the heartbreaking helicopter crash on Sunday as well as their granddaughter Gianna Maria Bryant.

The Sun approached Pamela on Sunday when she was standing outside of the house of Kobe’s sister Sharia. When asked for a comment on the passing of her son, Pamela responded: “Not right now.”

An unknown man at the house told the reporter: “Right now they have nothing to say but they are obviously heartbroken. There will not be any comments from the family right away. At some point the family will be reaching out but right now we are all in shock. Right now they’re just trying to be a family.”

RELATED: Dwyane Wade Gives Tearful Goodbye To Kobe Bryant: ‘Today Is One Of The Saddest Days In My Lifetime’