Magic Johnson And Michael Jordan Share Loving Tributes To Kobe Bryant: ‘I Loved Kobe – He Was Like A Little Brother To Me’ 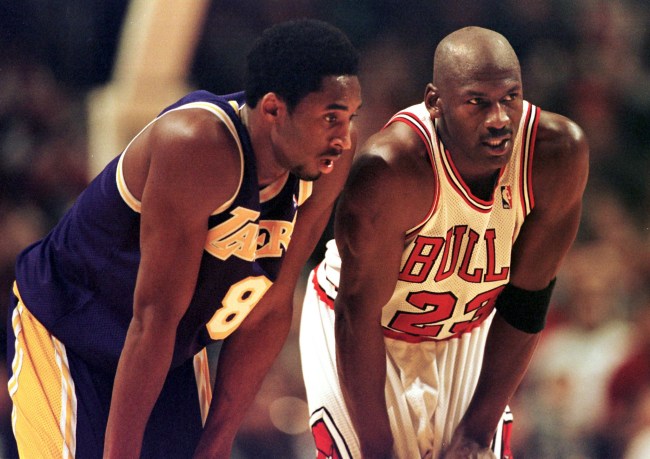 Michael Jordan was Kobe Bryant’s idol. Micahel Jordan was everything that Kobe Bryant wanted to be, and he modeled his entire game after His Airness. Kobe became arguably the closest to Michael Jordan that the world has ever seen. Kobe even got to play against his hero in the NBA and developed a friendship with his mentor. But on Sunday, it was Jordan singing the praises of Kobe Bryant after the Lakers legend passed away.

Michael Jordan, who is chairman of the Charlotte Hornets, eulogized Kobe by issuing a statement where he said he loved Bryant and saw him as a “little brother.”

“I am in shock over the tragic news of Kobe’s and Gianna’s passing,” Jordan said in a statement on Sunday. “Words can’t describe the pain I’m feeling. I loved Kobe – he was like a little brother to me.”

“We used to talk often and I will miss those conversations very much,” MJ continued. “He was a fierce competitor, one of the greats of the game and a creative force.”

“Kobe was also an amazing dad who loved his family deeply – and took great pride in his daughter’s love for the game of basketball,” Jordan said in his tribute to Kobe and his family. “Yvette joins me in sending my deepest condolences to Vanessa, the Lakers organization and basketball fans around the world.”

Earvin Magic Johnson also paid tribute to Kobe in a series of tweets. Johnson called Kobe a “friend” and the “greatest Laker of all-time.” Johnson called Kobe an “icon” who helped the homeless and was a supporter of women’s basketball. “Cookie & I are praying for Vanessa, his beautiful daughters Natalia, Bianka & Capri, as well as his parents Joe & Pam & his sisters,” Johnson wrote in a tweet honoring Bryant.

I love him, his family and what he stood for on the court and off the court.

My friend, a legend, husband, father, son, brother, Oscar winner and greatest Laker of all-time is gone. It’s hard to accept. Kobe was a leader of our game, a mentor to both male and female players. pic.twitter.com/NXsrXmCkkG

He gave his knowledge, time, and talent to tutor so many at the youth level, collegiate level, & NBA & WNBA players. Words can’t express the impact that he had on the game of basketball. I know basketball fans all over the world will miss him, especially the City of Los Angeles. pic.twitter.com/ZoB3Uwbvzk

He was such an icon but also did so much for LA. He was passionate about serving the homeless and was an advocate for women's basketball. Coaching his daughter’s basketball team brought him so much happiness.

Kobe and I shared so many special conversations about life and basketball. We had so much in common off the court. I used to love talking to him about Lakers basketball, being fathers and husbands and how much we loved Italy. I will miss those conversations and him so much. pic.twitter.com/PIv7obzr2x

Laker Nation, the game of basketball & our city, will never be the same without Kobe. Cookie & I are praying for Vanessa, his beautiful daughters Natalia, Bianka & Capri, as well as his parents Joe & Pam & his sisters. We will always be here for the Bryant family. pic.twitter.com/WWxmtEAJqZ

During his 20-year NBA career, Kobe Bryant was an 18-time All-Star who led the Lakers to five NBA championships, and scored 33,643 points, which is fourth all-time one spot ahead of Michael Jordan.

You can read dozens of tributes to Kobe Bryant from the sports world and celebrities, including Dwayne Wade, Bill Russell, Kareem Abdul-Jabbar, Jerry West, Tom Brady, the Wu-Tang Clan, and more HERE.