Dwyane Wade Gives Tearful Goodbye To Kobe Bryant: ‘Today Is One Of The Saddest Days In My Lifetime’ 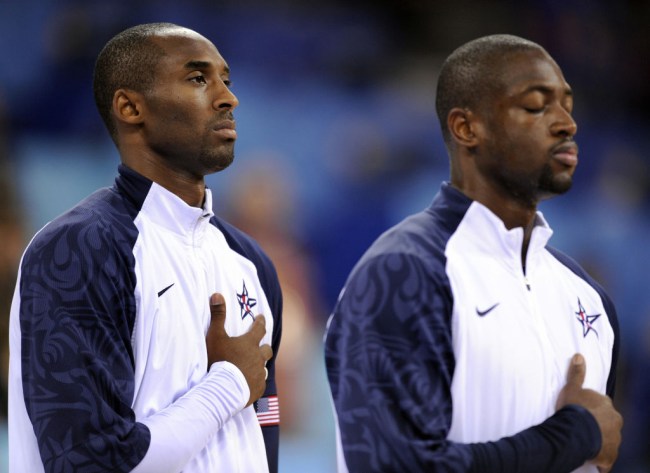 The world is mourning the loss of Kobe Bryant, and those who knew #24 best are understandably living through a nightmare. One of Kobe’s biggest admirers wasn’t a Los Angeles Lakers fan, but one of his greatest competitors — Dwyane Wade. On Sunday, Wade attempted to verbalize how much Kobe Bryant meant to him in a tearful goodbye.

When news first broke of Kobe’s death, Dwyane reacted on Twitter with a tweet that said: “Nooooooooooo God please No!”

Wade didn’t respond for hours until he shared a gut-wrenching video explaining his true feelings of the loss of his friend. “Today is one of the saddest days in my lifetime,” Wade said in an Instagram Story video. “It seems like a bad dream that you just wanna wake up from. It’s a nightmare.”

The former Miami Heat star gave an emotional tribute to how much Kobe meant to him on the basketball as well as a friend. “I know we’re all feeling the same way about such a great leader, just a great champion, a great person,” Dwyane said. “If you got a chance to know Kobe, if you got a chance to really know Kobe, there ain’t nobody better, man.”

“Emotions are all over the place,” Dwyane admitted. “These are the moments where you ask ‘Why?’”

Despite all of his accolades, such as being a three-time NBA champion, 13-time NBA All-Star and Finals MVP, Wade said one of the factors that drove him is that he “wanted to be respected by” Kobe Bryant.

“Kobe, thank you man, thank you for all the memories. And we got a lot of good ones,” Wade said as he tried to fight back his emotions. “And these tears that we’re crying, we gonna miss you. And it’s not gonna go away. We forever, forever miss you man. Thank you for being my friend.”