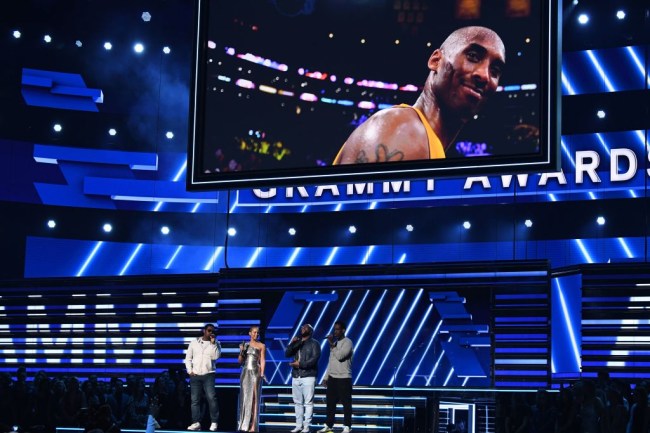 Only hours after news broke of the death of Kobe Bryant, event organizers and music artists scampered to create fitting tributes to the Los Angeles Lakers legend.

Kobe Bryant and eight others died on Sunday morning after the NBA player’s personal helicopter crashed into a hillside in Calabasas, California. The future NBA Hall of Famer was only 41-years-old, and his 13-year-old daughter Gianna also passed away in the helicopter accident.

For 20 seasons, Kobe Bryant dominated the NBA in his home court of the Staples Center. Soon after the tragic news broke that Kobe had died, Lakers fans gathered at the Staples Center to pay their respects to the NBA great in an impromptu vigil.

Heartbreak at the Staples Center as fans gather to remember one of the greatest athletes of all time. Rest In Peace Kobe Bryant. #RIPMamba #Kobe pic.twitter.com/QYgro4NQ4S

Flowers being set up at LA Live for Kobe Bryant

The Grammys are at Staples Center tonight, so plaza in front is blocked off. Dozens already beginning to gather here pic.twitter.com/6gHUVwGphB

Hundreds of fans chanted outside the Staples Center to pay tribute to basketball legend Kobe Bryant, who died in a helicopter crash in Southern California. https://t.co/xdOulVCI6b pic.twitter.com/ujSr5wMYdL

The only problem is that police closed down the area near the Staples Center because the venue was hosting the 2020 Grammy’s.

But once the 62nd Annual Grammy Awards began, the tributes to Kobe went from outside the Staples Center to inside the Staples Center. Instead of Lakers fans paying their respects to Black Mamba, it was music artists who honored the late basketball legend with emotional musical performances.

During the Grammy’s, a light was shined on Kobe’s jerseys, which were retired by the Lakers on December 18, 2017.

Kobe Bryant's jerseys are illuminated inside the Staples Center tonight during the #Grammys pic.twitter.com/8sleNRp5zh

“We never imagined in a million years we’d have to start the show like this,” Keys said. “So we wanted to do something that could describe, a tiny bit, how we all feel right now.”

"We're literally standing here, heartbroken, in the house that Kobe Bryant built" – Alicia Keys from the Staples Center, where Bryant's retired 8 and 24 jerseys hang in the rafters #GRAMMYs pic.twitter.com/t5tyXZTULI

Keys along with Boyz II Men performed a somber rendition of the 1992 classic End of the Road. The R&B group, which began in Philadelphia as did Kobe Bryant, belted out a heartfelt acapella version of their song.

"We love you Kobe." @aliciakeys and Boyz II Men sing in tribute to Kobe Bryant and his family at the opening of the #Grammys https://t.co/kk0nIau0ee pic.twitter.com/v3KpXSkvyW

Lizzo, who won the Grammy’s award for Best Pop Solo Performance for Truth Hurts, proclaimed, “Tonight is for Kobe!” The Lizzo sang her hit song Cuz I Love You.

Lizzo kicks off the #GRAMMYs by dedicating the night to the memory of Kobe Bryant pic.twitter.com/xUht1o1h5L

Before the Grammy’s started, there was a moment of silence held for Kobe Bryant.

You can see all of the Kobe Bryant tributes from the sports world and celebrities, including Dwayne Wade, Bill Russell, Kareem Abdul-Jabbar, Jerry West, Tom Brady, the Wu-Tang Clan, and more HERE.