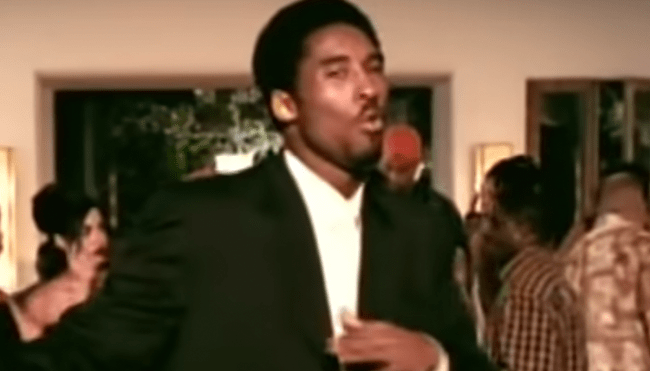 In 1999, Kobe Bryant followed in the giant footsteps of Shaquille O’Neal when he decided he wasn’t simply happy being one of the most dominant players in the NBA and turned his attention to the world of hip-hop after inking a record deal with Sony.

Bryant started honing his skills as a member of the rap group he joined when he played high school basketball in the Philadelphia suburbs. It’s only appropriate that he gave off some serious Will Smith vibes when he hopped on the mic, but that’s really where the comparisons end.

Kobe’s debut album Visions was slated to come out a few months after he unveiled its eponymous single alongside Tyra Banks at the NBA All-Star Game in 2000.

Unfortunately, that lackluster performance would mark the beginning of the end of his music career, as the album was quietly shelved due to the vacuum of hype it created, and Bryant was dropped by his record label shortly after.

Following the tragic death of the NBA legend, L.L. Cool J recounted how he reacted after hearing the full album for the first time, which he labeled  “the funniest moment of my life.” While he failed to get Kobe to rethink going the gangsta rap route, he said he still respected Bryant for shooting his shot—even if that shot was the equivalent of one of Shaq’s free throws.

Visions seemed like one of those lost albums that was lost for a reason. However, when you consider the list of unreleased tracks includes songs featuring 50 Cent, Nas, and Destiny’s Child, it’s hard not to be a bit curious about what they would’ve sounded like.

Thankfully, we now have our answer, as the entire album made its way onto the internet on Monday night (although the CD it was on apparently degraded to a point where the last few tracks are basically unlistenable.)

Kobe Bryant in 2000 made an entire album, it has finally been fully recovered and leaked 🕊 pic.twitter.com/LxAgae001K

After giving it a listen, I think it’s pretty easy to understand why the album never saw the light of day, as it’s about as underwhelming as you’d expect. With that said, I’m just glad this piece of history has been (at least semi) preserved for posterity.