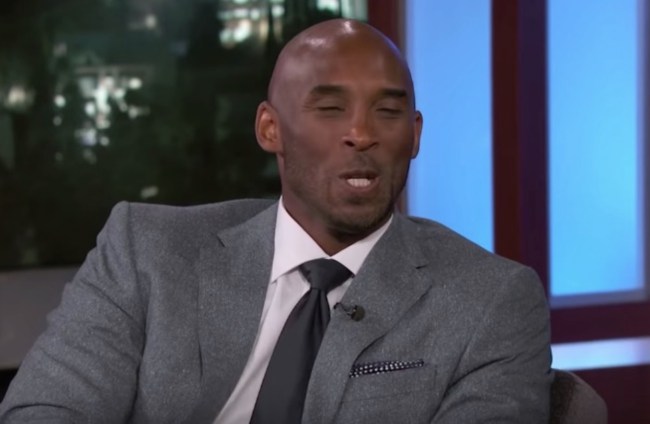 Kobe Bryant recently welcomed the birth of his fourth daughter and he was a guest on Jimmy Kimmel Live last night where he sat with the host for a great interview that touched on everything from fatherhood to his recent media feud with Shaquille O’Neal. Kobe’s name has been in the news recently because of a comment he made about how he “would’ve had 12 fucking rings” if Shaq wasn’t ‘lazy’.

He talked about how he wished Shaq would’ve hit the gym harder. Shaq fired back with a comment on Instagram saying: “U woulda had 12 if you passed the ball more especially in the Finals against the Pistons #facts. You don’t get statues by not working hard.”

This drama seemed to come out of nowhere considering that both of these NBA legends are retired and Kobe isn’t in front of the camera as often as he used to. In last night’s interview on Kimmel, Kobe clarified his comments around the 4:20-mark of the video.

I’ve set the clip to start then, but if you want to skip back and watch the beginning of the interview where Kobe talks about fatherhood and how his wife would slap him if he tried to bring the ‘Mamba Mentality’ into the delivery room, you can be my guest and start that video from the beginning.

Here, Kobe says that people only jumped on the second half of his quote but that it was actually meant to be a compliment. Kobe claims Shaq “was the most dominant player I’ve ever seen, and I felt like he could’ve been the greatest of all time.”

Bryant then went on to discuss how he texted Shaq and said he smoothed it over with Shaq and would be tuning in this year to watch his son play at UCLA and that Shaq’s son “better shoot the damn ball 30 times.”

Kobe says people missed that part of the quote and only caught onto the ‘lazy part’ of the quote but he says it was all tongue-in-cheek and I don’t see any reason we wouldn’t believe him. Kobe doesn’t have any reason to go around dishing out compliments for no reason. Kobe knows they weren’t going to win 12 rings and he admits that.