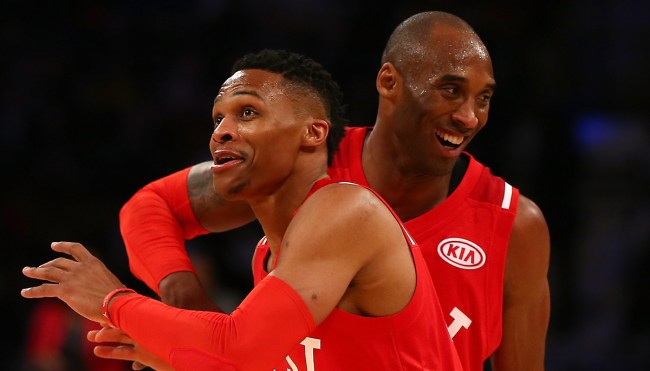 It was pretty clear Russell Westbrook was not too sad to see Kevin Durant leave Oklahoma City when the latter took his talents to Golden State in 2016, as the duo had repeatedly butted heads while playing together on the Thunder and only saw their beef continue to escalate in the years that followed.

The biggest factor in the rift that formed when the two men were teammates was the fact that they were engaged in a battle of egos to become the biggest star on the squad, but if a recent report is to be believed, they got a little bit of help from the one and only Kobe Bryant.

Bryant was able to cement himself as one of the most legendary NBA players of all time thanks to the Black Mamba mindset that defines his legacy; after all, we’re talking about a guy who wasn’t shy about subjecting his own teammates to his wrath if he felt they stood between him and greatness.

On Wednesday’s installment of The Woj Pod, Adrian Wojnarowski shared an incredible anecdote about how Westbrook fell victim to that ruthless mentality when he was playing alongside Bryant on Team USA during the 2012 Summer Olympics (the segment begins around the 38:00 mark), saying:

“Kobe knew LeBron was coming. He knew LeBron was going to win championships and maybe take his mantle as the best player in the game—if he hadn’t already—but he would mess with LeBron with different mind games.

By the time they got to 2012, LeBron had already won the championship in Miami. At that point, Kobe used Team USA—he was more worried about those young guys in Oklahoma City—and he would try to get Westbrook.

Kobe would tell Westbrook, ‘Why do you keep letting KD win these scoring titles? You should be winning the scoring title.’ He would get that in Westbrook’s head to try to send him back to Oklahoma City to create friction just for a little edge to keep the Lakers out front.”

Based on how things ultimately played out between Westbrook and Durant, it seems like Bryant did something right.