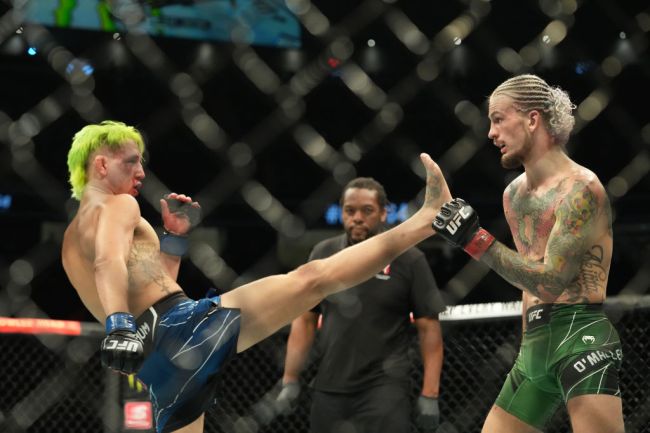 Less than two weeks ago, Moutinho took his fight against Sean O’Malley on 11 days notice after O’Malley’s previous opponent Luis Smolka pulled out with an undisclosed injury.

During his pre-fight press conference Moutinho revealed that he was working 80 hours a week at paint factory about a month ago before he decided to dedicate himself full time to MMA.

Sean O'Malley's replacement opponent Kris Moutinho was working 80 hours a week in a paint factory just a month ago and is now fighting in the main card of the biggest UFC event of the year. A true Rocky story @MoutinhoKris #ufc264 pic.twitter.com/MV8CgfAmh4

Moutinho went on to make his UFC debut on the biggest fight card of the year and made a name for himself by going toe to toe with O’Malley for three rounds until referee Herb Dean stopped the fight.

Unsurprising, but wooooow Moutinho is a ZOMBIE… 😳💀💀💀🧠💥🤛 #BrainDamage pic.twitter.com/AosbiXJL4R

After the fight, UFC President Dana White awarded Moutinho a 75k bonus for his performance in the “fight of the night.”