Kwame Brown Challenges ESPN’s Stephen A. Smith To A Fight For Talking Trash About Him 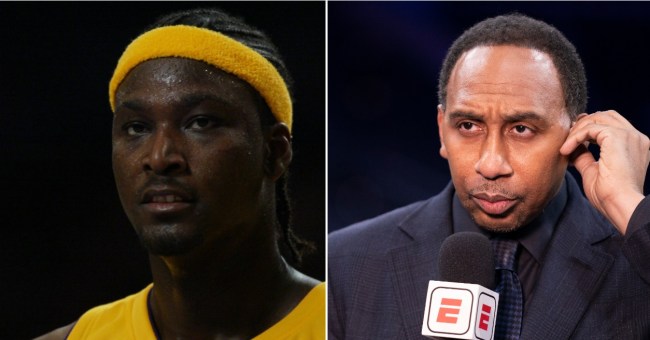 Kwame Brown has finally gone around to addressing Stephen A. Smith during his revenge tour.

In the past few days, Brown has gone off on tirades directed at Stephen Jackson, Matt Barnes, and Gilbert Arenas.

Considering Stephen A’s most famous rant was calling Kwame Brown a “bonafide scrub” when he got traded by the Lakers for Pau Gasol you knew it was only a matter of time until Brown came for him.

"This man was a bonafide scrub" 😭 pic.twitter.com/5Wc3D9sIEM

In his latest rant, Brown ripped into Stephen A. Smith for mocking him when he was a 17-year-old kid. Brown goes on to challenge Stephen A. to “mutual combat’ so he can slap him across the head.

“A 17, 18-year-old kid and you walk around like you’re a big tough man, you were going to college campuses speaking on teenage kids, and your only talent is knowing a bunch of big words and talking disrespectful to the children…Stephen A you bald forehead motherfucker, I don’t know why you got people thinking you’re tough saying all kinds of shit saying you can come see me, meet me in Seattle where we can have mutual combat and talk like that, it’s going to look like you got a toupee in the front of your head by how hard I’d slap you”

Stephen A. might want to tread lightly cause Gilbert Arenas claims Brown needed to be subdued by 20 bodyguards during a fight one time.

“It took 20 bodyguards to take him and his brother down inside a club.”