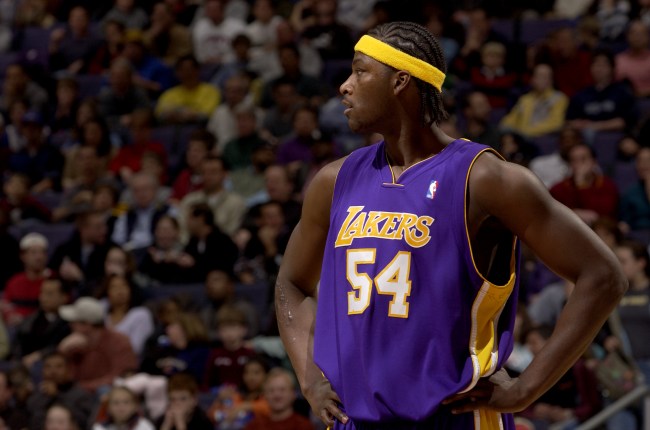 Kwame Brown has a bone to pick with Stephen Jackson, Matt Barnes and Gilbert Arenas.

Earlier this week, Arenas was a guest on Showtime’s “All the Smoke” hosted by Jackson and Barnes. In the interview, Arenas talked about Brown, who he played with during his early years with the Wizards.

Arenas analyzed what went wrong with Brown, who was drafted #1 overall by the Wizards in 2001 but ended up being one of the all-time draft busts in NBA history.

According to Arenas, he believes Kwame had all the skills to be an Anthony Davis type player but Michael Jordan had destroyed his confidence by bullying him when he first got into the league as an 18-year-old rookie.

The 39-year-old Brown made a Youtube video to respond to the podcast. In the video, Brown disrespectfully calls Barnes “Becky with the good hair”, tells Jackson to put down his blunt and “act like a grown man instead of a little boy”. and accused Arenas of costing him millions of dollars via contracts.

Kwame Brown has a message for Gilbert Arenas, Stephen Jackson and Matt Barnes

Stephen Jackson maybe you can put that motherfucking blunt out and pull your pants up on your ass and put that rag down and act like a grown ass man instead of a little ass boy.

Becky with the good hair, go to counseling and Gilbert you already knew, I was quiet on you for years and I wasn’t going to say nothing…you took food, what did I get 3 years/ 85 mil for the Lakers, I was supposed to get 88…N***** you took millions out my mouth, and you shout like you love black folks, you’re the whitest black boy I’ve ever known.

Barnes had apparently talked badly about Brown before because Kwame went on IG live just to take shots at him.

Becky with the good hair you better shut you’re motherfucking mouth, cause I don’t like the way you started this shit and that better be the last time you mention my name Becky.