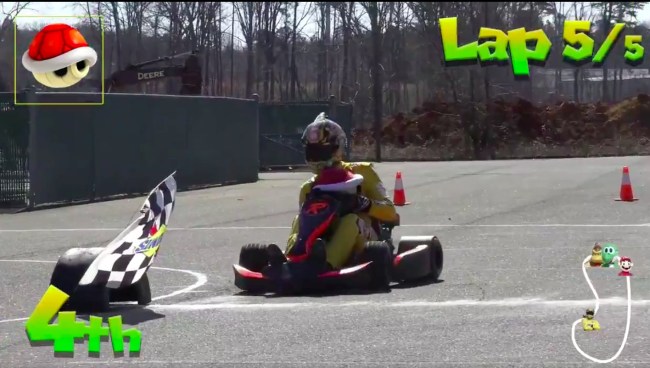 Regardless of what the “NASCAR isn’t a real sport” crowd has to say, I’d love to see any of the haters get behind the wheel of a stock car and make it even one lap at breakneck speeds before crashing directly into a wall.

The professionals, on the other hand, have no problem navigating tons of metal around a track at hundreds of miles per hour for a grueling amount of time, and while they have to go through one hell of a training regimen to do so, that doesn’t mean they don’t occasionally have a little bit of fun.

If you’ve played on a Nintendo console over the past couple of decades then you’ve undoubtedly gotten a little too into one of the various iterations of Mario Kart at some point. I had plenty of access to more modern consoles in college but there was nothing more enjoyable than plugging in an old N64 and attempting to navigate Rainbow Road in an inebriated state.

I might not have been as good as the guy who almost set a record if it hadn’t been for one of those pesky blue shells but I like to think I could hold my own in Battle Mode—the original battle royale game.

Kyle Busch recently chose to take Mario Kart to the next level when he decided to set up a course complete with throwable shells and traffic cones masquerading as coins as a way to give his kids—and his Twitter followers—some extra entertainment.

All the countless hours of playing Mario Kart prepared me for this moment 🍄🍌⭐️🏁 pic.twitter.com/JJxLruw3a9

If Busch is happening to look into adopting someone in their late 20s I’m more than happy to abandon my family if it means I get a chance to drive this track.