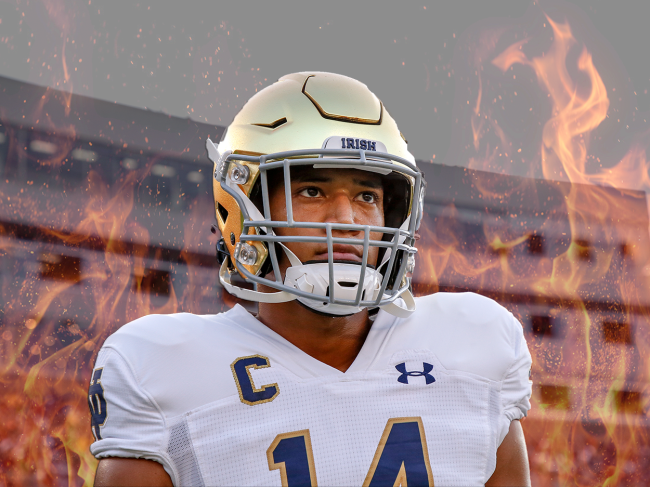 Kyle Hamilton has been in the NFL for about three months, but he is already learning how vicious its fans can be. The first-year safety out of Notre Dame got absolutely shredded for one terrible play at training camp over the weekend.

Hamilton, who was drafted with the No. 14 overall pick in the 2022 NFL Draft, is expected to plug right into the starting lineup for Baltimore this fall. The Ravens are high on his potential and he fills a significant void at the position.

However, his first week of training camp did not end on a high note. Hamilton got absolutely cocked by Bailey Gaither, a former San Jose State receiver who was on the Packers practice squad last year and stood out during the USFL spring season. It was ugly.

Not only did Hamilton get burnt, but it wasn’t even close. Gaither scored with the utmost ease.

To make matters worse, it all went down in front of a decent sized crowd. Baltimore fans were forced to watch their first round pick get toasted by an undrafted free agent.

Kyle Hamilton just got Cooked by a nobody raven fans are in shambles😭 pic.twitter.com/loqP4AIgaR

As a result, NFL Twitter had a field day. They got on Hamilton within minutes and clowned all over him for getting beat so badly.

The conversation surrounding the Ravens rookie got so loud that even he had to address the situation. Hamilton got baptized into the brutality of NFL Twitter in the worst way possible.

yo i am getting fried on this app rn😂

Now, Hamilton is a safety. He will not be lining up in 1-on-1 situations against the slot receiver, and he’s not necessarily a “freak athlete,” so it isn’t a huge deal in the grand scheme of things. It was one bad play, but man, was it bad.