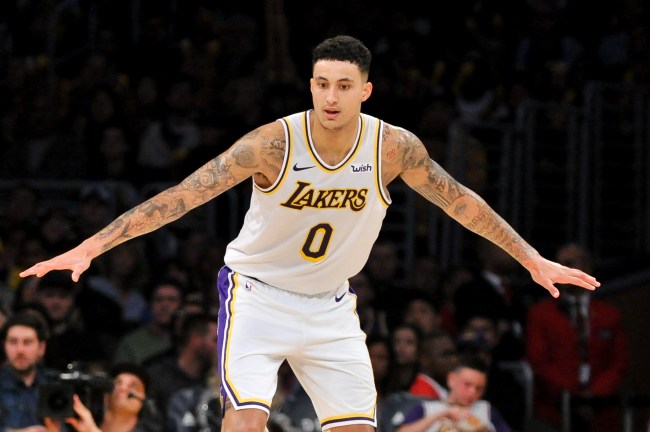 It seems like Kendall Jenner has moved from Ben Simmons and found herself another NBA star to latch on to.

This weekend Jenner was spotted with Kyle Kuzma on a luxurious yacht celebrating the 4th of July.

Kendall Jenner is moving on after her split from Ben Simmons.

On Fourth of July, the model spent some quality time with her rumored love interest Kyle Kuzma aboard a luxurious looking yacht. The two stars were able to soak in the sunshine and watch the dolphins frolick in the ocean. Kendall shared a sneak peek of her day aboard the boat on her Instagram Story, which was pretty jealousy-inducing.

Kuzma is the biggest X-Factor for this Lakers team and he’s dating a Kardashian. RIP https://t.co/nrlNccSWaw

5 hours later Kawhi is a clipper

Lakers might as well get rid of Kuzma now bc his career is over now that he's with a Kardashian. Fucking fool.

Can they do a reality show revolving around the lakers locker room and lives?!? … Lebron, Javale, Boogie, Rondo and Kuzma dating a Kardashian…. wow. TLC is about to hit up Jeanie to get this show going.

Kuzma better not bring that Jenner/Kardashian bs this season

LMAO kuzma dated a kardashian for five minutes and Kawhi and PG13 goes to the clippers.