Kyle Lowry Forgets How To Basketball, Tries Diving Between Another Player’s Legs While Dribbling And Twitter Had Jokes 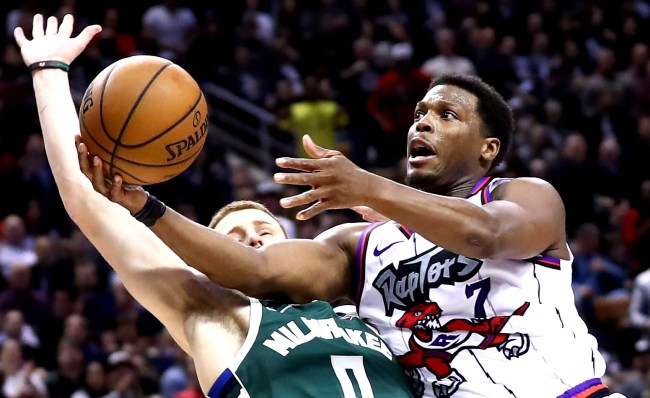 Tuesday night during the Toronto Raptors and Milwaukee Bucks game, All-Star guard Kyle Lowry had one of the weirdest brain farts you will ever see on a basketball court.

Lowry, who was being guarded by George Hill, attempted to nutmeg the Bucks defender… with his entire body. Yep, Lowry tried to go between Hill’s legs with not just the ball, but his whole body.

Needless to say, this “unique” maneuver didn’t work out very well as Lowry was whistled for an offensive foul on the play.

Lowry is losing his mind. pic.twitter.com/87WFtRVAI1

Did Lowry honestly at that moment think diving through Hill’s legs was the best way to go?

This is a six-time NBA All-Star, folks.

Kyle's always up to something 😂😂😂 pic.twitter.com/3qBR9py4KY

Lowry’s night at the Scotiabank Arena didn’t get much better after that move either as he ended up just 2-for-12 shooting with four turnovers and five personal fouls in the Raptors’ 108-97 loss.

Amazingly, this isn’t the first time a player has tried to dribble his entire body between an opposing player’s legs. J.J. Barea tried it once. It didn’t work for him either.

I am reminded of JJ Barea trying to go between Hasheem Thabeet's legs a few years ago, might have to dig up the video pic.twitter.com/gXnm8r8ZNv

As SB Nation pointed out, however, Nate Robinson did actually pull the move off in a G League game.

Of course, Twitter was quick to make numerous jokes at Lowry’s expense.

This is most Kyle Lowry thing I’ve ever seen https://t.co/Ln6pN400aQ

Harden so jealous he didnt think of this first pic.twitter.com/G7De2jv8oW

this may be defining play of kyle lowry’s career https://t.co/yCmHqtsLvL

This what Kyle Lowry on? pic.twitter.com/OrZTYoBwOT

"It's an interesting move."