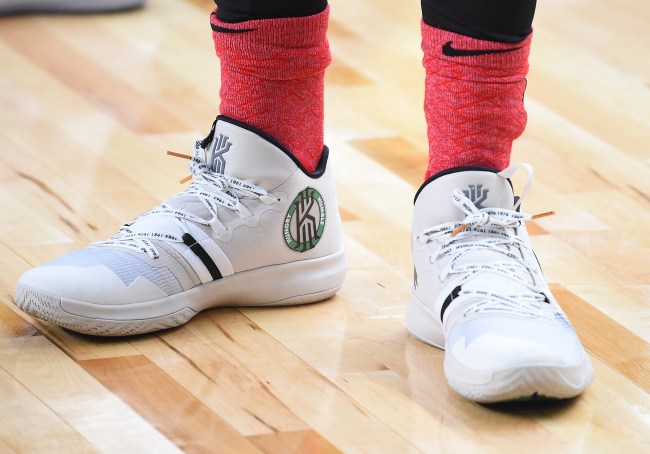 LOS ANGELES, CA - FEBRUARY 17: Basketball sneakers worn by Kyrie Irving #11 of Team LaBron during practice for the 2018 NBA All-Star game at the Verizon Up Arena at LACC on February 17, 2018 in Los Angeles, California. (Photo by Jayne Kamin-Oncea/Getty Images) NOTE TO USER: User expressly acknowledges and agrees that, by downloading and or using this photograph, User is consenting to the terms and conditions of the Getty Images License Agreement.

Kyrie Only Signature Basketball Sneaker to Grow Sales in 2017, No Adidas Stars in Top 5

According to the NPD Group, LeBron James had the top-selling signature basketball sneaker line of 2017, as Nike continued its domination of the $1 billion performance shoe market. 73.5% of all basketball sneakers sold in 2017 were made by Nike, with that figure ballooning to 81.3% if you count pairs sold by corporate subsidiary Jordan Brand (7.8%). Kyrie Irving (Nike) had the 2nd best-selling shoe, for the 2nd year in a row; with Kevin Durant (Nike), Stephen Curry (Under Armour) and Michael Jordan (Jordan Brand) rounding out the Top 5. It should be noted that Irving was the only player on the list to grow sales YoY, as performance basketball shoe sales have declined -13% from their 2015 peak ($1.3 billion).

Howie Long-Short: Nike controls the performance basketball sneaker game, but it’s sports leisure and retro that is in fashion; which explains why Adidas (see: Stan Smith, NMD, Superstar) shares are +17.5% YTD, while Nike trails behind at +6.9%. Adidas (ADDYY) just reported Q1 ’18 revenue grew 10% YoY, with North American sales up +21% YoY; for comparison purposes, NKE sales declined -6%, UAA was flat during the 1st 3 months of the year.

It’s worth pointing out that Adidas did not have a signature basketball performance shoe among 2017’s best sellers, despite having MVP front-runner James Harden on the payroll. Derrick Rose (post injury) and Damian Lillard are 2 other guys that fail to move the needle for the company.

Fan Marino: Curry falling from 3rd in ’16 to 4th in ’17 is disappointing, if not unsurprising, news for Under Armour; which overestimated consumer demand for the Curry 4. In wake of the disappointing release, UAA performance basketball shoe sales dipped -39% in 2017. The company now controls just 12.1% of the market.

While Jordan hasn’t laced up in 15 years, the AJ32 technically counts as his signature shoe. Retro AJ models aren’t counted in signature basketball sneaker sales figures, but if they were, Jordan would be running away with 1st place. The retro market did $3 billion in 2017 sales, 3x performance; and Jordan Brand took in 65% of that revenue.

Tomorrow’s 144th running of the Kentucky Derby, presented by Woodford Reserve, falls on Cinco de Mayo (as does the 145th edition) and Corona Extra, Angry Orchard and Budweiser have all signed on to sponsor the day’s celebrations. Combined, the 3 brands will replace Stella Artois as the event’s beer sponsor. Corona Extra will serve as the Official Import Beer of North America’s oldest, continuously-held sporting event; hosting a fiesta in the infield for the 160,000+ in attendance and sponsoring Cinco de Mayo parties across the country. Angry Orchard, the Official Hard Cider of the Derby, plans on using the platform to show their newest innovation; Angry Orchard Rosé. Budweiser acquired the rights to serve as the Official Domestic Beer sponsor and for those wishing to remain sober, Coca-Cola has replaced Pepsi as the event’s Official Soft Drink provider.

Howie Long-Short: Louisville based Brown-Forman Corp. (BF.B) took over title sponsorship of the “most exciting 2 minutes in sports” from Yum Brands (YUM) and is using the exposure to market their Woodford Reserve bourbon; the key ingredient in a mint julep (the event’s signature drink). On March 7th, BF.B released its fiscal Q3 ’18 financials; a strong report that reflected net sales growth +9% YoY (to $878 million), with operating income up +11% YoY (to $304 million). The company’s American whiskey brands, Old Forester and Woodford Reserve, each contributed double-digit underlying net sales gains during the quarter (ended on January 31st). BF.B’s Q3 ‘18 results are comparable to net sales (+9% YoY to $2.5 billion) and operating income growth (+15% YoY to $894 million) over the first 9 months of the company’s fiscal ‘18 year. BF.B’s share price is up 42% over the last 12 mo., but has remained relatively flat YTD (-2%).

Angry Orchard is a subsidiary of the Boston Beer Company, best known for brewing Sam Adams. Trading under the symbol SAM, the company reported Q1 ’18 earnings on April 25th. Net revenue rose +17.8% (to $28.8 million) as shipment volume increased 15%. CEO Jim Koch noted that the company had seen a “significant improvement in Angry Orchard trends”. SAM hopes that its new Angry Orchard Rosé product can draw clientele from the beer and wine categories.

As for Churchill Downs, Inc. (CHDN), in March the company announced it would be acquiring casinos in Pennsylvania and Mississippi, as it prepares to capitalize on legalized sports betting. Both PA & MS have passed sports betting legislation that would change their laws, should the SCOTUS strike down PAPSA. CHDN also owns brick and mortar casinos in Illinois, Kentucky and Louisiana, 3 other states actively working towards sports betting legalization. Following release of the news, shares climbed to a 52-week high ($268.20). They’ve only continued to rise.

The company reported Q1 ’18 financials on April 28th, including a rise in both net revenue +13% YoY (to $189.3 million) and adjusted EBITDA +36% YOY (to $49.2 million). CEO Bill Carstanjen attributed the growth to strong performance from the company’s casino and TwinSpires businesses. Casino adjusted EBITDA increased $9 million YoY, while TwinSpires’ adjusted EBITDA increased +$3.3 million as the company increased its handle to 20.2%; a significantly higher take than the balance of the thoroughbred industry (14%). CHDN shares are up 64% over the last 12 months (S&P +/-10%) and 17% since April 13th, currently sitting at $274.85 (Thurs. close).

Fan Marino: 19 million people are expected to tune in on television for tomorrow’s race and Louisville icon Rick Pitino is likely to be one of them, despite co-owning a horse (Coach Rocks) running in the Kentucky Oaks. When fired by the University of Louisville in November, Pitino vowed to never return to the state. He’s since softened his stance, but in early April leveled an ultimatum stating he wouldn’t return to Churchill Downs unless both David Grissom (University Chairman) and John Schnatter (Papa John’s, Vice Chairman), “retire from the University Board of Trustees”. Of course, Grissom and Schnatter are the guys who fired Pitino when college basketball’s pay-to-play scandal broke. I admire Pitino’s pettiness, but fail to see how his absence hurts Grissom/Schnatter; it certainly seems as if Pitino is cutting off his nose to spite his face.