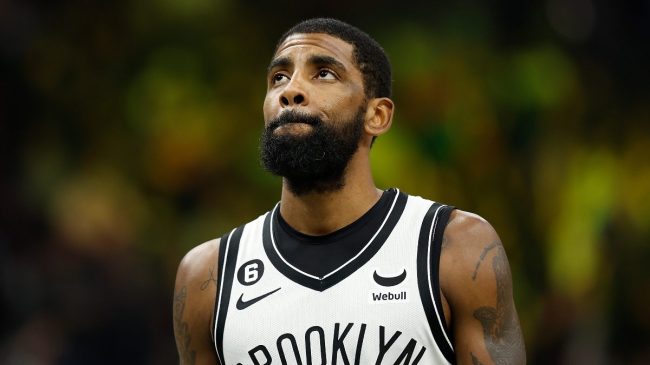 Another day has passed and Kyrie Irving continues to make himself look like a fool. He’s certainly caused a ruckus on Twitter after posting some controversial tweets regarding the Jewish faith. Everything he’s done has been in poor taste. However, the Brooklyn Nets guard isn’t backing down even after the NBA issued a statement.

According to Tomer Azarly, the NBA issued a rather generic statement in regard to Irving’s controversial posts. They simply state they won’t put up with any kind of hate speech. And that’s about it. Even so, at least Adam Silver and the league are making an attempt to quiet the Nets’ star.

However, it didn’t seem to work. In a postgame interview after Brooklyn suffered another loss, Kyrie Irving went back and forth with reporter Nick Friedell. The veteran reporter was simply asking Irving about his controversial posts about the antisemitic film he shared.

Rather than answering the questions, the Nets’ guard became argumentative about the whole situation. First, he claims he wasn’t promoting the antisemitic film when he shared it on his massive platform. From there, he then accused Friedell of “dehumanizing” him. Even though Kyrie Irving dehumanized the entire Jewish faith by sharing controversial posts.

Two days after posting a link to an antisemitic film (that’s still up), here’s Kyrie Irving:

– Claiming that posting a link to something isn’t promoting it 🤔

– Accusing a journalist of “dehumanizing” him by simply asking about itpic.twitter.com/qGdDVO7awA

If anything, the Nets’ guard has made himself look like a hypocrite during this spat with Nick Friedman. Maybe one day he’ll finally realize what he’s saying. Until then, it sounds like we may have to keep hearing Kyrie Irving go on tirades on Twitter.