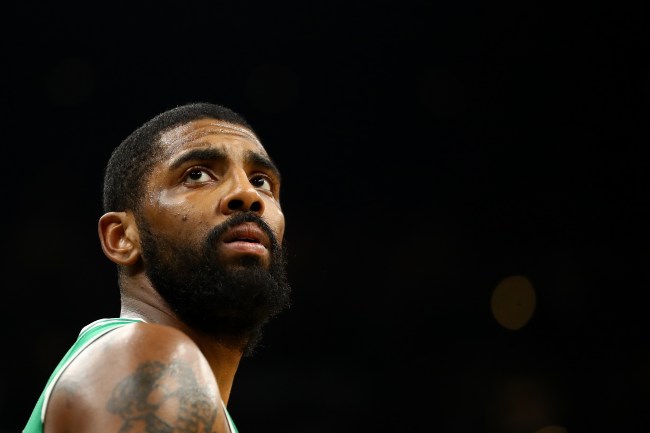 Kyrie Irving has said that he wants to be “the man” ever since his trade request from the Cleveland Cavs a couple of summers ago, which got him out of LeBron James’ shadow and into the leading role. And, just this week, he spoke about how he’s kind of pissed off about the rumors that he might be influenced by another superstar when he hits free agency at the end of this season, with many in the media wondering if he’ll team up with guys like Kevin Durant on a new squad.

While anything could happen when July comes around and he’s on the free agent market, one thing seems clear: Kyrie Irving will march to the beat of his own drum. It’s that thought process that led former Cavs general manager, David Griffin, to talk about a darkhorse contender for Irving’s services that many people might want to pay close attention to.

That team? The Brooklyn Nets, who will have a load of cap room this summer to try and convince Kyrie and/or other superstars to come to Brooklyn instead of Manhattan to play for the Knicks. Talk to NESN, here’s what Griffin had to say about the prospect of Kyrie Irving joining the Nets this summer.

“I think Brooklyn is the fit that’s better for him in terms of his mindset.”

““I think he likes what they’ve done there, culturally. I think that’s why Boston spoke to him as well.”

And here’s video of Griffin elaborating a little bit more, during the same interview with on an appearance with NBA TV.

The thought of Kyrie Irving to the Brooklyn Nets might first seem a bit insane on paper — after all, the Celtics are a legit title contender and have plenty of young pieces who could compete for years to come — but there are some reasons why Brooklyn might be intriguing to the All-Star point guard.

In addition to Kyrie being from nearby New Jersey, the fact that the Nets are currently the No. 6 seed in the Eastern Conference speaks volumes to how far they’ve come in the past couple seasons. When considering the team also boasts an All-Star in D’Angelo Russell and blossoming players like Spencer Dinwiddie and Caris LaVert, Kyrie Irving could see a chance to help shape them into serious contenders, too.

Thing is, Boston can offer Irving the most money this summer, he’s already established a rapport with the city and his teammates, and, on paper, it seems like there’s more upside with the Celtics roster than with the Nets. Still, David Griffin knows Kyrie Irving really well, so this suggestion definitely has to be taken seriously.