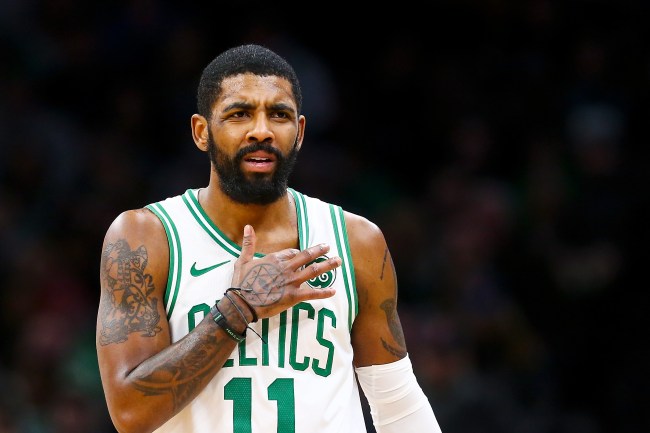 Kyrie Irving has long wanted to be “the man,” proving that he can lead a team to the promised land without the help of another superstar by his side. It’s one of the reasons why the former No. 1 overall pick demanded a trade in the summer of 2017, as he wanted to get out of the shadow of LeBron James and try to be Batman instead of Robin. So far, though, the idea has had mixed results for the All-Star guard.

Don’t get me wrong, Kyrie Irving is a bonafide superstar in this league, and is an offensive juggernaut who can create, and hit, every shot in the book. But his well-known adoration for Kobe Bryant — who stubbornly had a similar mentality as Irving — might be holding Kyrie back from being a legit title contender.

Whether that was breaking up with James in Cleveland or calling out his younger teammates on the Boston Celtics last month, it’s obvious that Kyrie Irving wants to be alpha dog — and, according to recent reports, his ego may get in the way of teaming up with a superstar this summer in free agency. Still, the dude did still, reportedly, say he was “interested” in rejoining James in Los Angeles, so he may be contradicting himself a bit.

That’s according to a recent piece on SI.com from Chris Mannix, who spoke to one of Kyrie Irving’s former teammates about the guard’s future, along with some of the frustration he’s shown since landing in Boston 1.5 years ago.

But the Celtics remain quietly confident that they are on the same page with Irving, maintaining constant communication with the All-Star guard. “A partnership,” is how one source described the Celtics relationship with Irving, who has been frustrated—like many inside Boston’s locker room—by the uneven play this season but has been positive, publicly and privately, about the direction of the franchise.

The root of his frustration, a former teammate of Irving’s told SI.com, could have little to do with Boston at all. Irving hates the narrative that other players (Kevin Durant in New York; Davis in Boston) can influence his decision, the ex-teammate said. He gets frustrated when he feels people are trying to manipulate him. In his mind, it doesn’t matter if it’s Davis or James—he’s going to do whatever he wants to do, and to assume otherwise is disrespectful.

Considering Kyrie Irving wants to be “the man” and not be influenced by outside factors, that report makes total sense. Plus, when you add in his reply last week about a question about free agency after a game in Madison Square Garden where he, frustratingly, replied, “Ask me July 1,” it’s clear that Irving isn’t happy with all the reports out there about teaming up with another superstar like Kevin Durant or Anthony Davis. Or, more so, he’s frustrated that one of those guys, among others, will influence him to join them somewhere.

The NBA trade deadline is just a couple of days away, and, with free agency approaching for Kyrie Irving, it’ll be interesting to see if he reassess things in a few months once the landscape, potentially, changes. Given the fact it takes at least three All-Stars to even compete for a title these days, Irving would be wise to swallow his pride a little bit when that time comes, because he may be costing himself a serious legacy by being so stubborn about the current rumors.