Kyrie Irving Is Reportedly ‘Interested’ About Reuniting With LeBron James In L.A. 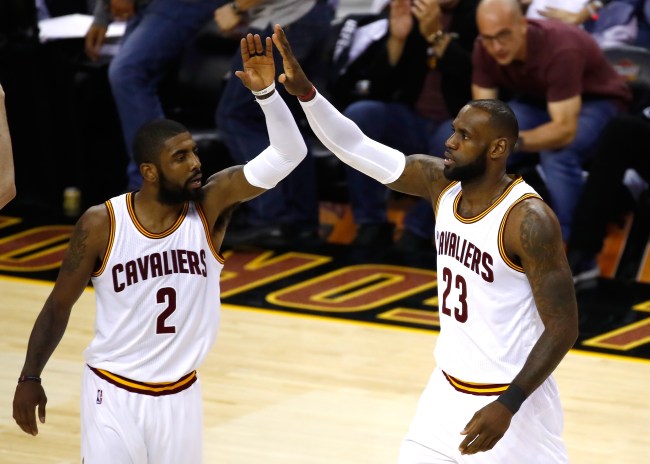 Two years ago, Kyrie Irving forced his way out of Cleveland because he didn’t like how LeBron James treated him like a little brother. It seems like Kyrie has changed his tune about LeBron and might be willing to reunite with his former Cavs teammate in LA according to a report from Ric Bucher.

Kyrie Irving is extremely serious about rejoining LeBron in LA, per @RicBucher.

Source close to Celtics says Kyrie is genuinely interested in reuniting with LeBron — "That is for real," per @RicBucher pic.twitter.com/5yJSnNlFka

Bucher’s report comes a month after Kyrie admitted that he called LeBron to apologize after learning that being a leader to young players isn’t easy.

Kyrie said he called LeBron to apologize for not understanding how hard it is to lead a team. 👀 (via @nicolecyang) pic.twitter.com/A2peDQsRHv

Kyrie Irving on recent criticism of his younger teammates: “I should have kept it in house.”

Kyrie said he called LeBron after the Orlando game and apologized for being that young guy who didn’t quite understand what LeBron was going through as a veteran leader.

Kyrie said he called LeBron after loss in Orlando to ask about leading group of young guys. "It's good to reach out for help."

Kyrie Irving said he called LeBron James and apologized. Said sometimes getting the most out of your group is not the easiest thing.

LeBron has also poured fuel on the Kyrie to LA rumors last week when he tagged Kyrie in a video on Instagram while singing “Rewind”.

They’re rewinding time and going back to when they were teamates…Kyrie is really about to be a Laker OMG 😳👀 pic.twitter.com/P7wfpb5sxg

The Lakers are also close to landing Anthony Davis via trade which means Los Angeles could form a superteam to compete with the Warriors next season if all goes according to plan.