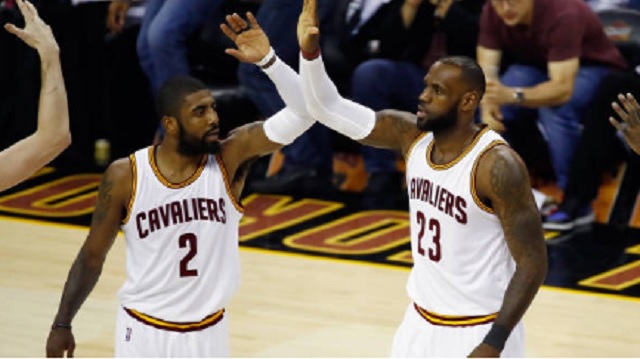 Kyrie Irving doesn’t want to play with LeBron James even on a hypothetical team 40 years from now. In an interview with the NY Daily News to promote his upcoming Uncle Drew movie, Kyrie was asked which current players he would choose to form a team with if they were to play a game in 40 years and LeBron’s name was nowhere to be found.

Q: Forty years from now, you have to pick four guys to form a team, who is on there?

KI: Of course KD (Kevin Durant). Just having a 7-footer on your team never gets old. You definitely have Steph (Curry) on there, James (Harden), guys that are just naturally skilled. You don’t have to do too much moving to get from point A to point B. At that age, you’re limited in movements, so probably just a bunch of shooters. Klay, as well, in there. Guys who can just space out and run the Princeton offense.

Kevin Durant over LeBron? Kyrie really wouldn’t pick arguably the second greatest player in NBA history to be on his team.

Bron must have brought out a globe and sent this dude NASA links everyday.

Kyrie continues to be petty with LeBron and it’s hilarious.