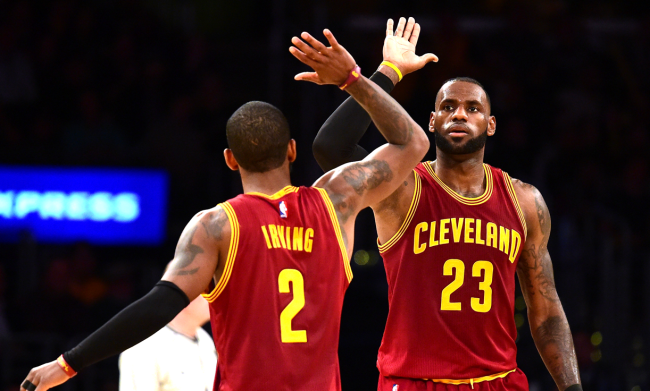 Back in July of 2017, when Kyrie Irving was reported to have asked the Cleveland Cavaliers to trade him, many assumed (and reported) that it was because he no longer wanted to play alongside (or in the shadow) of teammate LeBron James.

What made the request even more puzzling was the fact that Irving, James and the Cavaliers had just made the NBA Finals and were just one season removed from winning the NBA Championship.

A month later, Irving was sent to the Boston Celtics for three players and a draft pick.

The Cavaliers would return to the NBA Finals that next season, without Irving, getting swept by the Golden State Warriors. Irving and the Celtics would make to the Conference Finals, losing the James and the Cavs 4 games to 3.

This week, during his appearance on the I Am Athlete podcast, Kyrie Irving tried to set the record straight on why he asked to be traded from the Cavaliers in 2017.

“We gotta be cool as brothers whether we’re playing together or we’re not playing together. We have to protect one another because it will seep into family life where people will really think that we don’t like each other based on us not being able to play together anymore. ‘You asked for that trade so you must hate that dude!’

“It’s not true! That’s not true, so I had to defend myself. he had to defend himself, and it’s like, I’m trying to put that to bed so I could continue to build my own legacy, but I am continuously reminded over and over again, ‘You left Bron. How could you do that?’

“And I said, I asked them for a trade because I was looking for something different. I was a man of my word when I went to the organization. I sat the higher ups down and said look, ‘I know you have future plans, tell me right now.’ They told me their future plans. I said, ‘Look, this isn’t for me.’

“Shared that with them, didn’t get a chance to talk to Bron before the media ended up coming out and saying that I asked for a trade.

“So I go over to China and I’m on my Nike tour… somehow the news gets leaked while I’m in China! I’m not even on American soil right now! So I can’t even get on, to defend myself!

Related: Kyrie Irving Set To Lose His $11M Per-Year Sneaker Deal With Nike, According To Report

Kyrie Irving clears the air about asking to be traded out of Cleveland:

"They told me their future plans. I said, "Look, this isn't for me." … Didn't get a chance to talk to Bron before the media ended up coming out and saying that I asked for a trade."

“So now I see all these reports, and you know, 12 hours ahead in China, so I’m staying up til like 4 a.m. like, ‘What’s being reported now?’ And I didn’t have a sense of how to manage that when all the media is coming after me.

“So now my agent’s on the phone. He’s like ‘We should do this, we should put out a statement, we should do this.’ But I had a conversation that needed to be had with the organization and then I was going to have it with Bron, but as soon as I got over to China, boom.

“Now it’s ‘Bron’s [inaudible] to do this, Kyrie’s saying it’s about this.’ That’s not the image I want to create.”