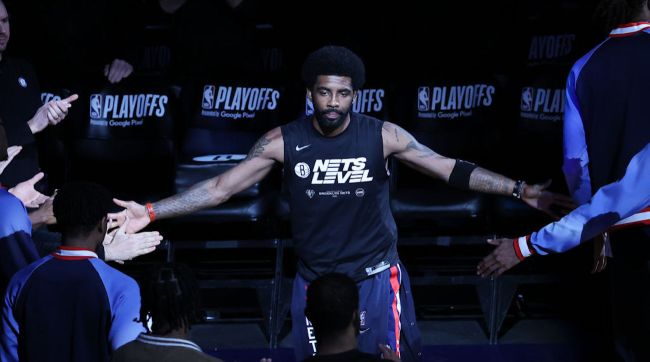 According to a report from ESPN’s Adrian Wojnarowski and Ramona Shelburne, Nike is “unlikely” to extend their contract with Brooklyn Nets point guard Kyrie Irving once his current deal expires following the 2022-23 season. ESPN states that Nike is concerned about “uncertainties surrounding Irving’s NBA future.”

Irving’s current deal with Nike is reportedly worth $11 million per year.

Reached by ESPN, Nike did not deny the looming end to Irving’s signature shoe series. “We don’t comment on contracts or rumors or speculation. Kyrie remains a Nike athlete,” a spokesperson told ESPN on Thursday.

Because of Irving’s popularity, it is expected Nike will still offer some product associated with him in the future, like retro shoes from previous collections, sources said. But as discussions between Nike and Irving about his endorsement future have commenced recently, it has become apparent his relationship with the company will change — perhaps dramatically so. [via ESPN]

The news about Irving’s Nike deal is just the latest twist for the embattled Nets star, who missed a large portion of the 2021-22 due to his personal choices regarding New York City’s vaccine mandates.

While Irving ultimately returned to the Nets in 2022, his reintegration with the team coincided with the Nets dropping from the #2 seed to the #7 seed. Irving and the Nets were then swept out of the postseason in the first round of the Eastern Conference playoffs.

The Brooklyn Nets higher-ups certainly sound like they’re expecting more out of Irving this year, as general manager Sean Marks recently said that the organization needs players who “want to be something bigger than themselves, play team basketball, and be available” when asked whether the team would be committing to Irving long-term.

RELATED: Kyrie Irving Sounds Like An Insecure Teenage Bully In Video Of Him Mocking NBA Fans, Calling Them ‘Cockroaches’