LA Angels Pitchers Throw Combined No-Hitter, Players Take Of Their #45 Jerseys And Placed Them On The Mound To Honor Late Pitcher Tyler Skaggs 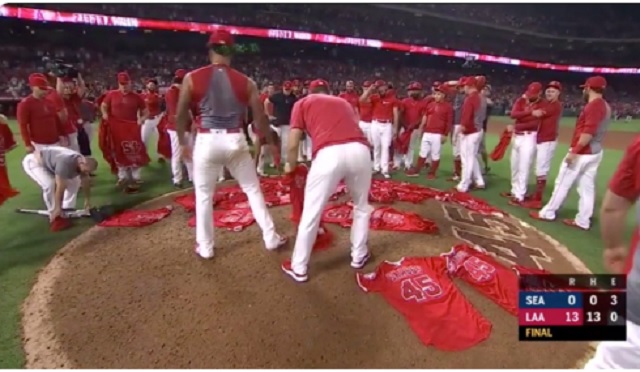 Last week, Angels pitcher Tyler Skaggs was found dead in his hotel room while the team was on the road in Texas.

Angels statement on the passing of Tyler Skaggs. pic.twitter.com/6XA2Vu1uWV

Tonight the Angels honored Skaggs in their first game back in LA in a big way.

First, Skaggs’ mother threw a perfect strike while throwing out the first pitch.

Tyler Skagg's mother, Debbie Skaggs, throws the first pitch in tonight's home game. The first game back in Anaheim since the loss of Tyler. #45

The Angels would go on to throw a combined no-hitter in a 13-0 win against the Mariners.

After the game ended all of the Angels players placed the #45 jerseys they were wearing to honor Skaggs on the mound.

WOW! One of the best sports moment I have ever witnessed @Angels. On the night the Angels honor Tyler Skaggs and everyone wore his jersey number, they threw a no hitter! #Amazing #WhatASpecialNight #45 👼 pic.twitter.com/oaUv7wiQfh

How Tyler Skaggs was honored today: His teammates all wore his jersey, his mother threw a strike to his best friend for the ceremonial first pitch, then the Angels scored 7 first-inning runs and pitched a combined no-hitter, from Taylor Cole and, for the final 7, Felix Peña.