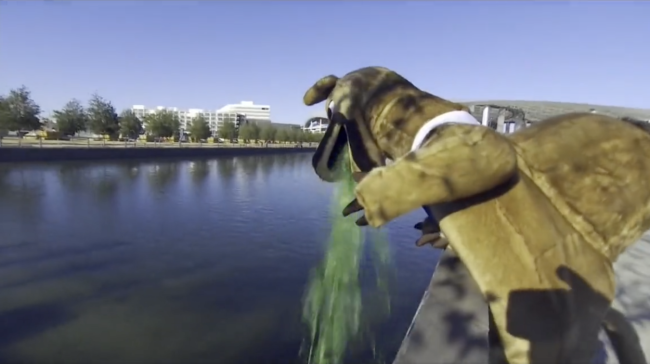 College football bowl season is one of the most wonderful times of the year and Jimmy Kimmel is a big part of this year’s fun. The 54-year-old television host and comedian is the first living person to have his name on a bowl game and it shattered expectations.

Kimmel is the title sponsor of the LA Bowl (presented by Stifel, because of course it is) at SoFi Stadium and Saturday marked the first time that the game has been played. Although the game itself was pretty entertaining, it was neither Utah State nor Oregon State that stole the show.

It was Jimmy Kamel, the LA Bowl mascot.

During a recent episode of “Jimmy Kimmel Live,” Kimmel consulted with Dave Raymond to make up a mascot for the bowl. The two of them came up with a puking camel.

You can get an understanding of how Jimmy Kamel came to life at the 6:53 mark:

After the race, Rutledge went to interview the Kamel, but it didn’t quite go as planned.

“How do you feel?” Rutledge asked. In response, the Kamel walked over to the water’s edge and vomited everywhere.

Rutledge immediately went to console Kamel and went to hold back its hair. Everybody needs a friend like Rutledge.

Jimmy Kamel encapsulates everything that is great about bowl season. It is supposed to be lighthearted and fun. The experience is for the players, first and foremost, but it’s also about having a good time and being entertained during what is essentially an exhibition game.

In addition to the Kamel, Kimmel’s LA Bowl featured the “world’s most powerful t-shirt cannon” and a Kimmel-inspired sandwich. Rutledge, being the legend that she is, tried the sandwich live on-air.

She also hilariously made fun of Kimmel on the sideline for having to wear a credential at his own game. But apparently, it wasn’t all smooth sailing.

Kimmel said that the parking attendant gave him a hard time upon arrival for having the wrong credential. He tried to explain that “no, I am Jimmy Kimmel, that is my name on the bowl” but apparently it didn’t help.

He got into the game eventually and even joined the band during pregame.

Jimmy had to join the band real quick at the Jimmy Kimmel LA Bowl 🎶 pic.twitter.com/etXuLjWGFk

The inaugural LA Bowl could not have been more of a success.