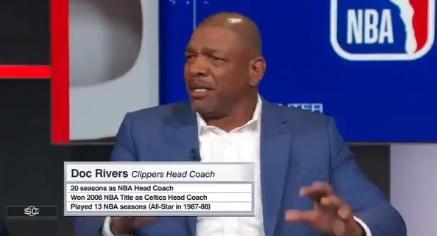 Clippers head coach Doc Rivers got his team in a bit of trouble earlier this weeken when he appeared on Sportscenter and compared Kawhi Leonard to Michael Jordan.

“[Leonard] is the most like Jordan that we’ve seen,” Rivers “There’s a lot of great players. LeBron is phenomenal, KD is phenomenal. Not that [Leonard] is Jordan or anything like that, but he’s the most like him. Big hands, post game, can finish. Great leaper, great defender, in-between game. If you beat him to the spot he bumps you off, and then you add his three-point shooting.”

Rivers’ praise of Leonard is going to cost the team $50k for violating the league’s anti-tampering rules.

NBA announced it has fined Clippers 50k for violating league’s anti-tampering rule after Clips coach Doc Rivers commented about Kawhi Leonard while on a recent show on ESPN.

The NBA has fined the LA Clippers $50,000 for violating the league’s anti-tampering rule. The fine is in response to comments regarding the Raptors’ Kawhi Leonard made by Head Coach Glenn “Doc” Rivers in a recent television appearance.

Of course Lakers fans couldn’t help to poke fun of the Clippers.

KAWHI AINT COMING TO THE CLIPPERS, DOC, LET IT GO

Wow someone other than the Lakers have been caught pic.twitter.com/OP0FfwDkRp